The Woburn Rally was organised by the BMF, who had recently changed their name from the Federation of One-make Motorcycle Clubs. 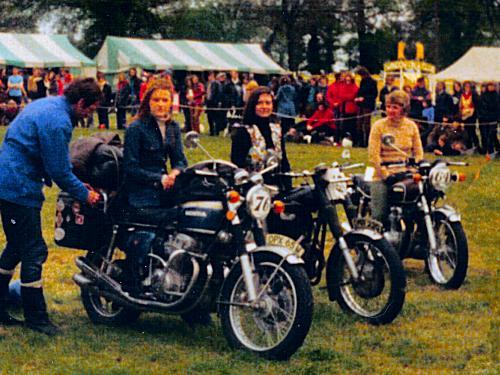 Set me on the motorcycling lifestyle I enjoy to this day

The 1968 rally was the first I ever did (Ron Mumford says it was his first too). I rode up on a manky old 500 Matchless and my boyfriend Tuck was on his duplex Bonnie. We camped with very little apart from a tent and two sleeping bags.

It was a small rally with a roped off central 'arena' and club and trade stands around the edge. I introduced myself to Brian Birch who was on the BSA stand as I had joined the BSA club when I had a 250 BSA. 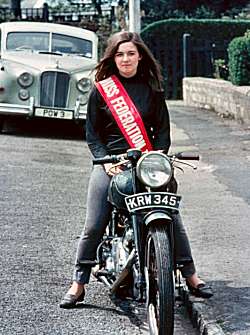 I entered the Miss BMF competition and also in the line-up was Maureen Willis who told me about WIMA (I didn't join until 1973 and was very active, serving as membership secretary for several years in the 80s) and Linda Bick (Linda Bootherstone) who had recently been to Moscow on her Triumph for the FIM rally.

I have not missed a BMF rally since - what a saddo! Winning the Miss BMF in 1969 on a Vincent I considered an honour and set me on the motorcycling lifestyle I enjoy to this day.

Miss Federation deserves six stars! From "Rallyman of the Year"