This rally was organised by the Worksop and District sticks in my memory and won't come out. If I could just taste the beer I'm sure it would come flooding back. Now was it Theakstons or Tetleys or maybe John Smiths? And pies that they pour hot gravy into the hole in the top. 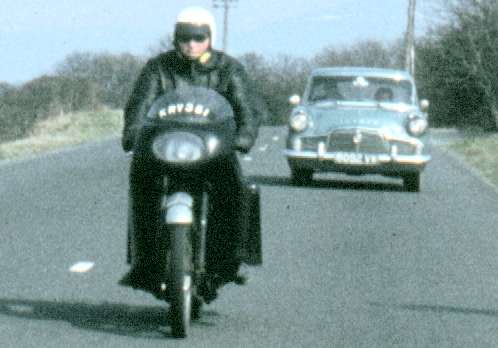 Returning from one of these northern winter rallies in freezing fog with Terry Riddle along the A46 Fosse Way we crossed the border into Leicestershire. Terry on Eccles (350cc Ariel single) was leading with head haunched into his shoulders against the wind chill. Where the road divides into a dual carriageway Terry's line remained dead straight as he droned south on the overtaking lane of the northbound carriageway. "What a joker." I thought mirthlessly as I steered my 500cc AJS single onto the southbound carriageway and accellerated to draw level with him.

It took a minute or two for him to realise someone was riding on his nearside across the central reserve. He did a double take and the realisation dawned across his face ending in a sliding emergency stop followed by a rapid U-turn.