The Squires Rally is an invitation only rally, held by the Squires in October* at a site not far from Dumfries. The Squires are a small group of friends who are to be seen at lots of rallies wearing top hats and tail coats. 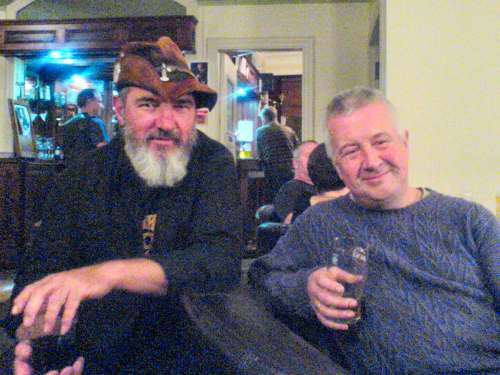 Eric had fun posing like a statue next to the waterfalls and fountains...

The first Squires Rally was held in 1984, and I must have enjoyed it, because I have managed to get to every one held since then.

The Rally used to be only just in Scotland, at the campsite in Gretna behind the "First House" and we used to drink in England at The Gretna Chase Hotel. It has moved around a bit over the years, with rallies held as far North as Crawford, but mostly down in the borders area. One notable year it was held in what I believe was Barry Carters back garden! It had an interesting trials section to get in and provided lots of entertainment for the people watching, (but not for the Gold Wing, or other big touring bike riders trying to get on site.) 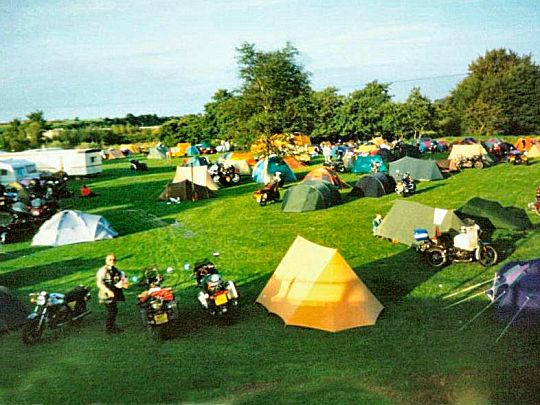 At Gretna it was nice to camp on a proper campsite, although being right next to the A74 it could be a bit noisy. The Gretna Chase Hotel more usually catered for wedding parties and there used to be a certain amount of crossover, with wedding guests sometimes gatecrashing the late night Squires Bar (a tent on the campsite). Quite what they thought of the antics of Brighton Bob, The Reverend Eric, and other characters I don't know, but they got some after hours drinking, so never complained. 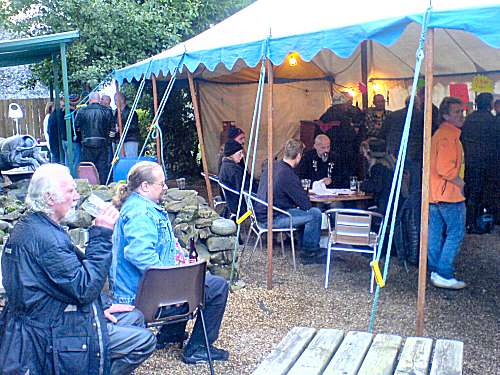 The year that we got a plastic mac along with our badge and sticker when we booked in, Eric thought it would be fun to wear it to go to the pub. This would have been OK, but that was all he wore! There was a floodlit ornamental garden all round the Chase and Eric had fun posing like a statue next to the waterfalls and fountains, while all the rallyists watched through the picture windows. The function room next door had a wedding party in it though; but I suppose it makes a change from the normal boring wedding photos! 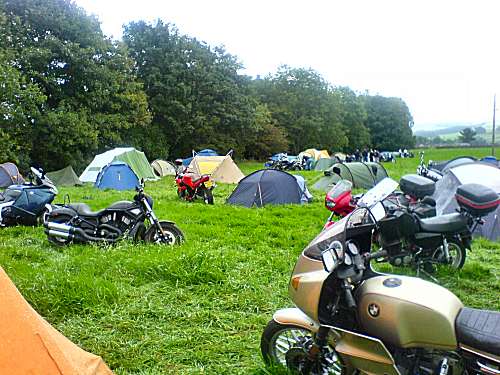 Bob nearly caused a coach crash one year; they used to slow down as they passed the "First House", for the tourists to take pictures. They were pleased to see a man stood in front of it in a kilt but, when Bob gave them a flash of the stockings and suspenders he was wearing underneath it, the driver nearly ran off the road!

Another time we all attended a mock Wedding. Bob did look lovely in his wedding dress, but I'm not too sure about his husband in the Sailor Suit!

Nowadays the rally is held in a village to the north of Dumfries, in a field behind the main street. For the past couple of years the rally was held at the same time as the village folk/beer festival and lots of locals mix in with the rallyists with no problems. The Hotel now seems to provide some nice meals at reasonable prices, but the very late nights can affect the breakfasts! Of course, due to the festival, lots of different real ale is on tap, a big improvement from the days of having to drink MacSpewans Fizz!

Due to the area the site is in it is impossible to get to the rally without riding on some superb Scottish roads, just watch out for the gravel!

The Squires is actually in September!

Great site, spent far too long wandering around it!

Couldn't you find your way to the beer tent? Oh, you mean LPMCC.net. I thought you meant the campsite!

Ah! Good times were had by all. Nostalgia is a thing of the past!