These were held at about Easter. The first year I did this rally with Ian Goodson. He rode a BSA I think and I was on the AJS. After disembarking the ferry at Roslare we rode in company with another couple of riders until late at night in Fermoy. There we knocked at the door of a little old lady for digs. It was just bad luck that all four of us had chosen to travel in black Belstaffs, brown corduroy trousers and motorcycle boots. 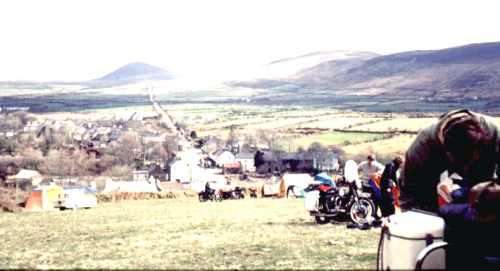 Anascaul was the closest you will get to a wild west town. It was one street lined with saloons, bikes parked outside like horses on hitching rails and carousing coming from within. We all staggered up to the Church Hall for a presentation ceremony and ceilidh. We were wondering who a couple of hundred bikers were expecting to dance with and in streamed all the sweetest colleens from the surrounding villages. After a couple of spirited jigs the evening was over. "Who's seeing you home?" we asked brightly. "M' brothers." came the response as their big brothers poured in through the doors to see them safely away.

I recall Ian G being very ill on the ferry back. At first he was afraid he would die. Then he was afraid he would not die. The trip from Holyhead along the A5 through Snowdonia was with brilliant sunshine on the snow. We even had time for tea with a group of young ladies taking their narrow boat over the Pontcysyllte aqueduct.

You can follow the original Shamrock Rally report in the Megaphone Archive. 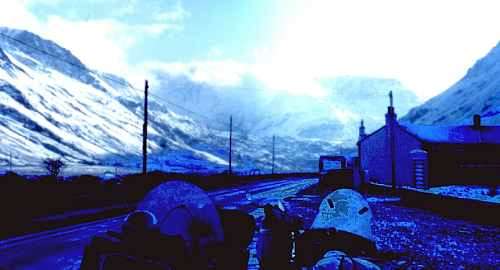 On another Shamrock I took the AJS and sidecar. Fifty miles from Dingle and late at night the chain broke so I spent the night finding out how impossible it is to sleep in the sidecar through the rain/ cold/ dawn chorus/ pony and dairy carts. From the Shamrock that year I returned to Stranraer and met the LPMCC at their Easter camp at Loch Trool.

Another Shamrock Rally was held at Lisdoonvana on the Conemara coast, this time with Tony Bradley and Derek Foster. We stayed at a farm house where the television picture disappeared when the fridge thermostat cut in. When we remarked to the gaffer that someone had spoilt the barren coastline with a Spanish style villa the response was "Sure, if he wanted to find a worser place he couldn't have found a better one."

At one time we found ourselves in a bar in the village - as you do. Three men came in and whispered to the landlord. The group all turned to look at the three of us sat on a bench seat under the bow window. The landlord crossed to the door and looked up and down the street, closed the door and put the bolts across. We began to get apprehensive. He walked over to us. "Would you gentlemen mind standing up?" asked the landlord. I thought they were seeing how well we matched up for a fight. I looked round to see if I could make it out of the window. The landlord walked behind us, lifted the lid of the bench seat and took out two bottles of smuggled brandy for his customers.

We had time to sample the porter in Dublin on the way home. We asked directions to a bar that served good Guinness. We were told they all did and we were sorely tempted to try them all. We found a place with pints of Guinness lined along the bar in various stages of being pulled. "May we have three halves of Guinness please?" we asked. The landlord looked at us in astonishment. "Halves?" he asked "Halves of Guinness?" He dusted three half pint glasses he found at the back of a cupboard and started the long task of filling them, interspersed with topping up full pints and serving other customers. Eventually the halves were pulled and paid for and we raised the glasses to our lips for a first sip. The porter was truly excellent. We hardly took the glasses from our lips, exchanged appreciative looks over the rims and then downed them in one gulp. "Three more halves please." we ordered. The landlord was furious. "Why the tarnation did you not ask for pints in the first place!" he roared.