Which rally was that then?

An amnesia outbreak in Essex left several leading personalities from the rallying world wondering what had happened. Said our rally correspondent: "It was like no other weekend I've known. I woke up on the Sunday with a headache and couldn't remember what happened on Saturday night. I've got bruises and beer stains but don't know how."

Left to right Dave Tibbles, me, Nigel with I.M.T.C Trastadite top on (it's something about smelling girls bike seats) Next I don't know and Robert.
Photo from Heather MacGregor

Nearly 400 people, many from abroad, were involved but no-one is quite sure about the details. Pictured are several amnesia victims. If they are not yet home their owners should claim them from some remote field next weekend.

Report from Motor Cycle Weekly sent in by Graham Mills

1981 Pilgrim's Rally with Dave Richmond and Terry Snelling on the bar. These were the two 'rival' journalists from the weekly motorcycle mags. Flash from the Dover 69 club is holding Dave's legs and it may be Roger Halfyard's brother who is assisting Terry.
Heather MacGregor

1986 Pilgrim's Rally: Chris Pitts on the front barrel as Ian Waugh looks on. Don't know who is on the other barrel.
Heather MacGregor

Flash from the 69 club with his Laverda
Heather MacGregor

Smiv n I only went to one Pilgrim rally, in 1976, along with a lot of members of our club, the Tees Tornadoes.

I'm sure it was at this rally that one of our club, "Mad Jim" turned up with his bike worse for wear and his riding boots absolutely trashed. He'd been knocked off his bike by a car driver not far from the rally. The bike careered through a hedge and into a field with Jim hanging on. He sorted himself out and rode back out of the field through the hole he'd just made in the hedge!

On the night he walked with us to the pub in bare feet. I think the pub had long benches and big oblong tables. The floor was very basic, no carpet. After a few beers the atmosphere was brilliant with lots of joking and bantering. Jim suddenly started singing "Oh I do like to be beside the seaside" We then realised he was splashing his bare feet in the spilt beer on the bare floor. We all joined in and we were swaying sideways on the bench, laughing and singing along. After a while Jim stopped singing and he was looking rather pensive. We asked "what's wrong Jim?"

He said "I want some WAVES", so we all threw beer at him.

"That's better" he said, and carried on singing!

During the course of the night we all decided that Jim couldn't walk back to the rally site with bare feet, so someone set to and made him a pair of sandals from beermats. Jim was delighted! (Roamin Sandles ... brill!)

Jim used to amaze us all with his antics, like diving off a pub table into a plastic cup of water, or doing a forward somersault whilst walking along with you and then saying "That's better, I needed that."

He really was/is? a character! ... Jim are you still out there? 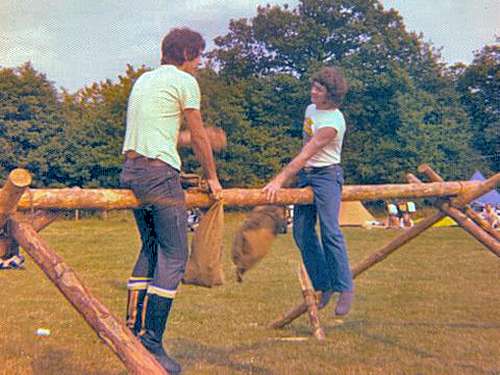 A picture of "Mad Jim", (the one on the right) taken at the Pilgrim Rally, and as you can see he is in his socks, no shoes, or boots, cos they were trashed in the accident with a car on the way to the Rally.
Photo from Dave Honneyman

Held by the Mayflower Club in Essex every August. This is a very good rally.

On arrival along with your badge you are given a bottle of the estate's wine!

The camping area is flat and large. The bar is like a mini beer festival with real ales and ciders on offer at very good prices. There is a disco on Friday and Saturday and a live band on Saturday.

The building next door has a canteen selling well priced food.

I meet up with people from the Waiffs and Strays, Bexley Gropers and UFOs at this rally. 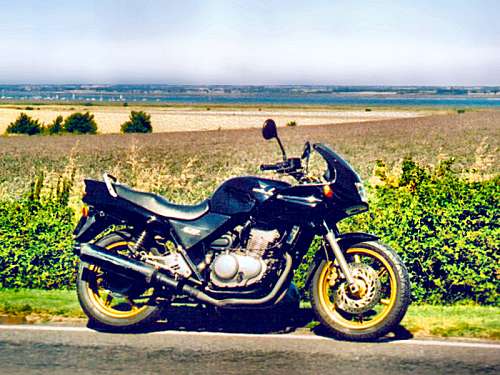 "The Life And Times Of Brotherhood"

Back in 1981 Norton Owners and us Triumph Riders partied on Labor Day weekend. Damn drunk tripped and fell onto my tent. Split the tent in half! Now what? Grab another beer and bash the boy in the morning....

Come Sunday morning we would have the "Bent Valve" story award.

Hard luck story getting to the party or camp Saturday. I'll tell you more next time....

OK Joe, you've had time to take a slug from the jug. Now tell us some more.