This year there were no other riders for the September rally. Shortly before the event, Axel Bodeit had technical problems with his Moto Guzzi. Since I had registered a Honda GL 1000 at the time, I encouraged Axel to ride this motorcycle to England. So, on Friday, September 28th, Axel Bodeit (Honda GL1000) and I, Hans Mondorf (BMW K100 RS) drove towards England.

From Calais we took the Hovercraft to Dover and on to the pub The Four Alls in Welford on Avon. The usual procedure, pitching the tent, freshen with cold water and then into the pub for customery pleasures. Both evenings we enjoyed good company and good food as usual.

SHAKESPEARE MOTORCYCLE CLUB An Invitation to the Autumn Rally 'PERICLES, PRINCE OF TYRE' At The Four Alls, Welford-on-Avon, Four miles south of Stratford-upon-Avon on the A439 September 28-30th, 1990 &5 NO NEED TO BOOK IN ADVANCE

On Saturday we visited Stratford on Avon and took a tour of the surrounding landscape. Traffic jammed somewhere because of one building site. Axel drove some distance in front of me. I saw a truck like a car opened at the back and a large cloud of dust formed (Rear-end collision). Axel probably couldn't brake fast enough and drove straight into the cloud of dust. "Oh no!" I thought, "now he has had an accident." When the cloud of dust cleared, he could be seen standing on the side of the road, still sitting on the Honda GL1000. Although he couldn't see anything, he was lucky enough to find that in the cloud of dust the left lane was clear, and he had not collided with the other vehicles.

With pounding hearts and trembling hands, we drove back to the pub and settled ourselves with a pint.

In the evening we received a tankard from the chairman for the longest journey from the continent. (Of course, we were the only ones from there) 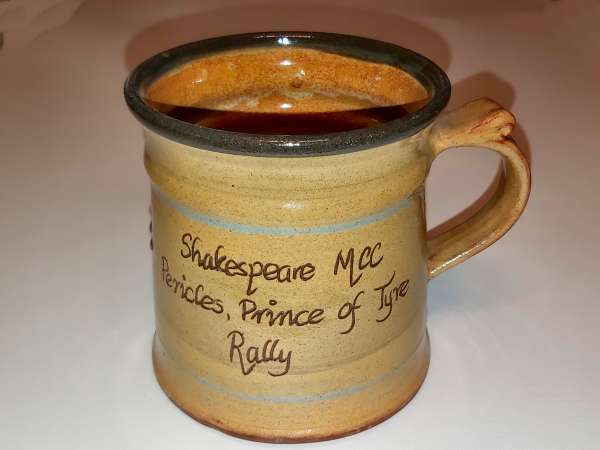