Well, after numerous reminders from a certain Phoenix committee member (mentioning no names - but he has a 450 Honda!) I shall now attempt to write this article although the subject - the Ox Roast Rally - was quite a few weeks ago ... Anyway here goes:

The Ox Roast Rally was held at a place just outside a place called Ilchester and quite a few members of our club went as well as some lads from the Corby and Kettering MCC. 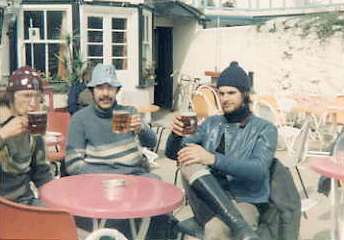 We left Leicester on the Friday evening and after stopping on the way for a meal we arrived at the site at about 10.30pm. It didn't take us very long to put the tents up and shortly afterwards everybody went to bed.

Terry, Steve White and Dave Cockerton arrived at about 1.30am followed by the Corby and Kettering MCC members about an hour later, so you can imagine we didn't get much sleep on account of the noise.

The following morning we were awoken by Dave Cockerton doing a Donald Duck impression from his tent. He later followed this with Mickey Mouse and Pluto but I don't think he was in pain.

Being only 20 miles from Lyme Regis we decided to go there. The sun was shining and it was really warm. As usual the fellas soon found a pub there and we had a ploughpersons meal.

We arrived back at the site during the late afternoon to find that some other Phoenix members had arrived. In the evening we went out to yet another pub, this time with all of our members and Corby and Kettering. There were so many of us that we almost took over the pub in the village. When we went back to the site we claimed our Roast Ox cob and glass of cider. Then we went back to our tents where some of the lads had built a fire and were sitting round it singing songs?! and drinking cider from gallon bottles which they had bought for 50p per gallon.

The next day after breakfast we began packing up although with certain people having slight hangovers it took a few hours to get ready. We had a fantastic journey home, the roads were really good and it was quite warm.

The only blot being 450 Hondas (NOTE 450 Hondas) being unable to stay upright. I think the rider was tired and fancied a lie down, so he arranged a puncture ... Seriously though, we were very glad that Terry was alright because it looked quite nasty. Well the bike did when we went back to find Terry (whoops!!!) and there he was surrounded by police. Well two policemen with his bike propped up against a tree.

Paul and I waited with Terry while Dave Scattergood went to fetch his dad's van to take Terry and bike home.

But apart from that it really was a great weekend and we're now looking forward to the next rally.

The only thing I can remenber about the only Ox Roast I did, was the wind. My Force Ten MK3 was being used as a windbreak by Uncle Peter and Kat. Which tent broke its ridgepole? - Answer: It was not the Force Ten.