In this year Axel Bodeit told one of his colleague about the beautiful rallies of the Shakespeare MCC in Warwickshire. He was so excited that he spontaneously agreed.

SHAKESPEARE MOTORCYCLE CLUB STRATFORD-UPON-AVON You are officially invited to THE 'OTHELLO' RALLY September 16-18th, 1988 at the Gaydon Inn, Gaydon, Warwickshire, on the A41, midway between Warwick and Banbury. £4.50.

Axel set the pace with his motorcycle and sidecar. Without significant traffic or technical problems it went to Calais to the Hover Port. A short crossing to Dover and than to the pub "The Gaydon Inn" in Gaydon.

The weekend went well with a trip to Warwick on Saturday and two social evenings in the pub.

A bit too early for us, at 11.00pm the bell ring "The last order now". But we learned in the rallies before that you should have filled enough beer into yourself by 11.00pm.

After a hearty English breakfast (I love it) on Sunday morning, we started our journey home.

There's a little anecdote to tell here. Axel drove up again and set the pace.

Not in front, not behind, but right in the middle of the Dartford Tunnel (The Queen Elizabeth II Bridge was not built at the time) the Moto Guzzi throttle cable broke. Axel dragged himself out of the tunnel to the hard shoulder on one carburetor. As you can imagine, there was a traffic jam in the tunnel, which was now slowly dissolving.

He knew his Moto Guzzi very well and always had some spare parts with him, including spare cables. That was quickly changed on the Moto Guzzi and the rest of the ride home went without any problems. 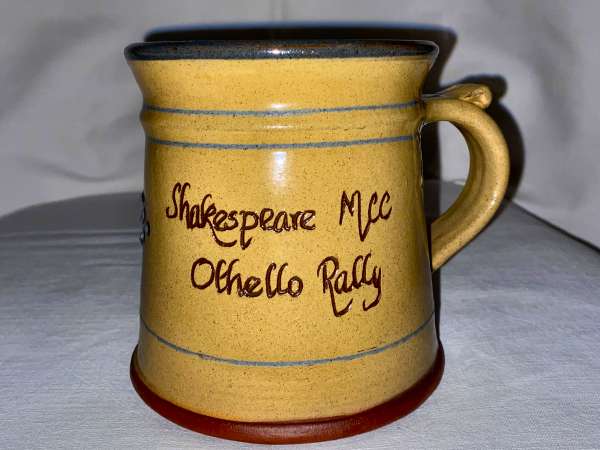 And of course on Saturday evening we got a Tankard for the longest distance from the continent as a prize from the chairman.

Once again a successful weekend with many happy memories.