The First Elephant Rally I went to was at the original site at the Nürburgring. The trip there was relatively easy despite being on a solo and I enjoyed the whole experience.

I went on my own, but there were quite a lot of other Brits there, so we all got together in the evening and tried to out drink and outsing the Germans!

The final rally at the Nürburgring (1977) was not so good on the Saturday night. Things had started to get out of hand when members of a patch club decided to destroy the food tent late in the afternoon. I had spent the day at a sort of autojumble held near the Sport Hotel and watching the bikes and cars on the Ring. When I went to the beer tent later on, it seemed to be ready to turn into a riot. After a narrow escape, when a wine bottle hit me on the back, I decided to spend the evening at a bonfire near my tent. I wasn't surprised at the decision to move the rally the year after.

I went to the 1981 rally on my 850 Suzuki/Squire outfit with Barry Clark. Straight down to Salzburg in one hit on the Thursday, all motorway. The stops to warm up in the services were getting longer and longer towards the end, when it was dark, and with hindsight it was too far to travel in extreme temperatures. 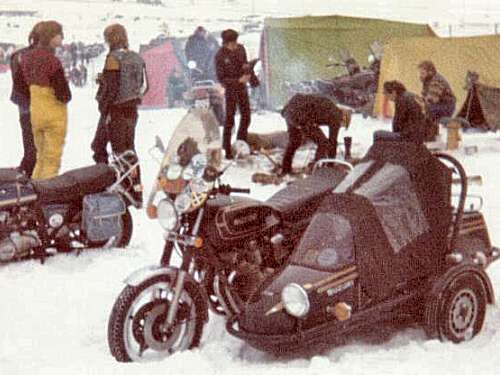 The Rally was excellent with an amazing variety of new and old bikes to look at. Hundreds of bonfires, snow sculptures, and in the evening a torch light parade around the circuit. 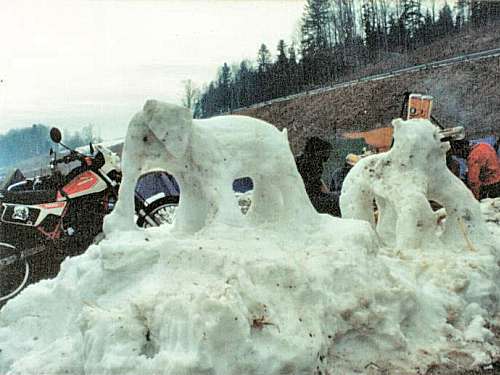 The only problem I had was the outfit sinking into the snow and then being frozen into place overnight. It took a lot of effort to dig and break it out of the ice and I was worried it might damage the wheels. Again there was a large Brit turnout and we managed to get together for a group photo. You should be able to spot Dave and Caz Tibbles and a young looking Nigel Woodthorpe amongst others!

"I recognise my two mates I did my 1981 rally with in the group photo. That is a very young looking Eddie and Pete Evans. Fantastic time."
Anon

The '83 event was done on my Gold Wing EML outfit. I took Ian Steele in my sidecar and traveled down through Luxembourg with Preston & Julie King, Danny and Rosemary from the Tornadoes and Jim Twaddle and Gordon ? from the Mercury MCC. 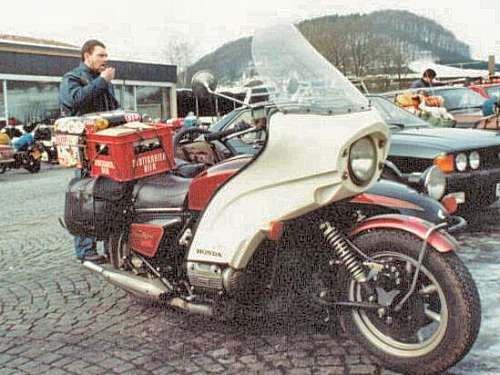 As usual travel with Preston was interesting. I was amused when he asked the members of our group what speed they wanted to cruise at (He was leading the way). I knew that neither his speedo nor rev counter were working! He also asked how far between stops, but we were intending to base this on my fuel range. In the event Preston ran out about 2 miles from the cheap fuel at the Luxembourg border, but as it was the top of a 2 mile descent, he managed to coast down the hill and into the services!

When I first saw his bike I wondered why he was carrying a spare rear tyre. Despite it being a Martini Yamaha XS1100 surely it wasn't that heavy on tyres? After following him for a while I could see the reason. The tyre on the bike was causing a bad low speed wobble. Preston changed the rear tyre in sub zero temperature outside the hotel we stayed in near Stuttgart, while the rest of us had breakfast! 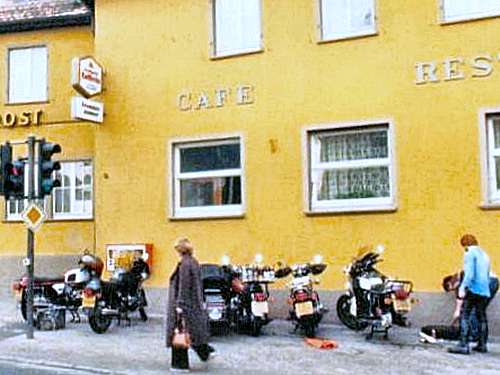 We had no problem apart from getting split up at the Austrian border and then I got stuck in a traffic jam just before the turn off for Salzburg. It was an expensive lesson for two riders from the BMW Scottish section. They were caught using the hard shoulder to get round the hold up and they had to pay a huge on the spot fine after being told "Ziss iz not permitted in Austria!" 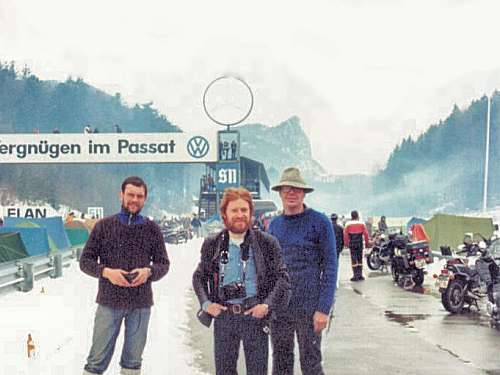 I had a close call on a steep downhill track just before entering the circuit. There was a policeman directing traffic at a junction half way down. We were doing OK until Gordon fell off his R100RS behind me. I had to accelerate to avoid being hit up the rear. The problem was that at that speed I couldn't make the turn and as we were on sheet ice I couldn't slow down. The policeman's car was blocking the escape route and he was in my way! He eventually jumped for it as I careered past, narrowly missing him and his car as I put the bike into the roadside ditch. He can't have been that upset about it despite all his shouting, as he helped us to lift the outfit back onto the road!

We all met up again in the circuit and camped together. Again I was impressed with the Rally and the sheer scale of it. 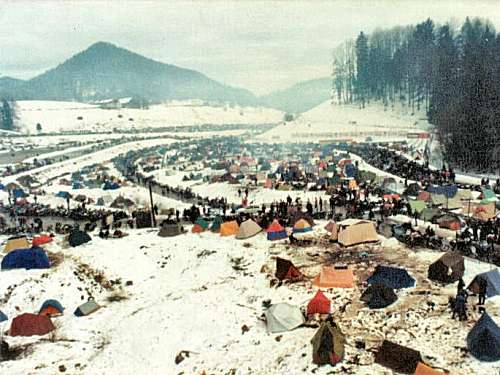 It rained overnight on the Saturday. When I started the bike to go home on Sunday I could only get it to run on 2 or 3 cylinders. I limped to the garage at the Austrian border, hoping to get some WD40 or something like it, but all you could buy there seemed to be cuckoo clocks or Austrian rum! I eventually got it sorted but it was lunch time by then and I had to be back for work on Monday!

The run back was done virtually flat out and I set my personal record at 75 miles for a tank of about four gallons of fuel. I had to slow down as at that rate we couldn't afford the petrol to get home! We were on the Calais/Dover ferry and so I only got a bit of sleep before the run up north on the A1. It was fine until Grantham and then it started snowing. I could have cried! 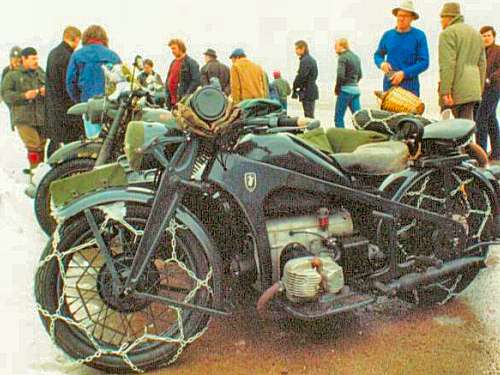 I dropped Ian off at home (Halifax) and then just had time when I got home to get washed and changed then off to work! I was sent home because I looked ill. I had given up trying to explain my lifestyle to them, but I doubt they would have believed that the day before I was in Austria!

Lesley and I went to the 1984 Elephant Rally for our honeymoon (I don't think the Damarts ever came off!) Bloody cold, lots of snow and riding - once we got it started! - on a Mk1 Guzzi Le Mans.

We actually rode a lot of the way back with a couple of guys from the LPMCC, I can't remember names, but one had a 900 Ducati and the other was on an RT100 BMW.

It was a bitterly cold day, so the plan was to accede to Lesley's demand of 'stopping once an hour' whilst trying to achieve 100 miles between each stop (we managed it twice) though we had to stop hourly anyway as by then the Duke was running on fumes and the BMW glowing red.

I also recall that the four of us stopped for the night in a gasthaus a mile or so off the autobahn, somewhere just short of the Dutch border. As by then it was a lot warmer and damp/overcast we relaxed a bit - nearly back at the ferry - and poured down a bucketful of beer each, only to wake the following morning with stinking hangovers to discover 6" snow outside; it proved harder getting back to the autobahn than it had been to get in/out of the Salzburg Ring.

Still on my bucket list, never quite worked up the bottle!

Doing it vicariously is the next best thing!

Just had a bad night shift, rally cheered me up.
By the way, my name's Preston