I was determined to go as I've missed the last few years through my back injuries and a knackered battery situation. So on the morning of July 14th, the trusty Kwacker was loaded ready to go. Mid week I had fell through floorboards in a property in Leeds and thought nothing of it but the effects of that faux pas were about to manifest themselves. 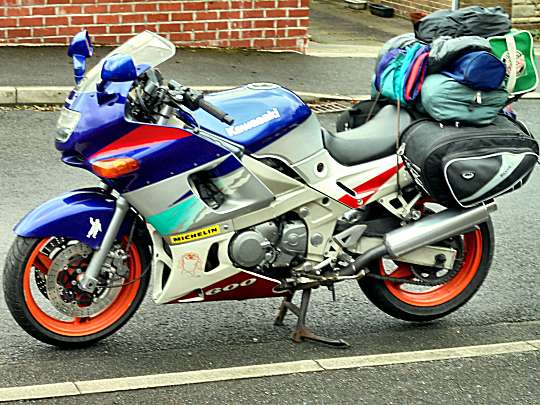 As I threw my leg over the bike between tank and luggage (failed), my left leg gave way and folded underneath me and I hit the deck. I knew immediately that my knee and ankle ligaments were damaged and my left big toe was broken.

I was however determined to attend the rally this year and so I got on the bike and set off on my usual route via Halifax, Keighley, Skipton, Kettlewell etc.

I'd bought a body cam which came with a plethora of fittings with the favoured one being a chest harness. However, the view turned out be a tad low but was ok and it was a trial run.

The M62 eastbound, Halifax and Keighley were a ball ache but I had the usual excellent ride up through The Yorkshire Dales National Park apart from wincing at every gearchange! The lefthand corner over The River Ure into Wensley Village always produces memories of 2009 when I had a front end blowout at 80 mph (sorry officer) and stayed on (just).

On arrival, I located a spot, dropped my side stand pad onto the deck and leaned the bike over and as my bike dropped comfortably onto the stand, I put my weight onto my left leg which promptly gave way again. I just succumbed and rolled off the side of the bike landing on my back on the grass. I lay for a minute contemplating "why me?" and then sat up to a fellow Rallyist enquiring as to my welfare.

On explaining my predicament he replied "yes ok, I thought it was too early to be pissed!"

Tent up, back agony but sorted. Whilst I do like the place a lot, the decision was made not to hobble uphill into Leyburn itself.

I noted that the site was almost full by Friday 1400hrs and this tells me that the majority of attendees were probably semi or fully retired which is a sorry state of affairs for the future of Rallies as little (if any) young blood.

I'd got talking with a few new people on the Friday night in the rugby clubhouse who eventually helped on the medical front. 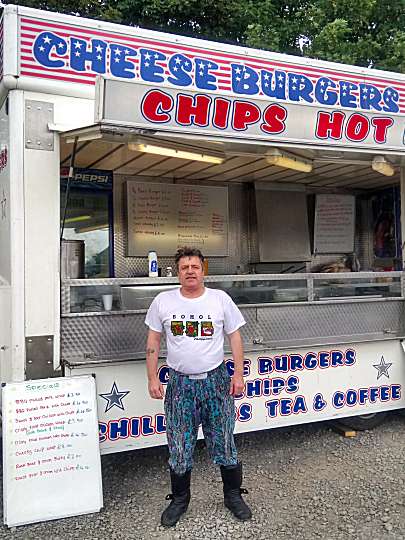 On the Saturday I was visited by long standing (none motorcycling) friends and a great time was had but the knee, ankle and toe situation was not good. I had a huge blister on the broken toe and my knee and calf were purple! I got assistance as aforementioned with a retired nurse tending my injuries. The blister was "popped, " cleaned, a padded plaster was put on the toe and a tubular bandage from toe to knee.

Saturday night was another good one just chatting and "sinking a few. "

Sunday was more back pain as I dropped the tent and loaded the bike.

I was then lifted onto the bike with the camera now mounted on the fairing utilising the harness under the mirrors etc and off I went home. Much better camera view but picked up every bump as I sped back the through the dales - now working on the hybrid ie chest mounted but higher.

Largely uneventful run home including fuel in Skipton were I used the "pay at the pump facility" meaning I just sat on the bike.

Next Rally is September in Cumbria where the video will be used again and hopefully with better results.