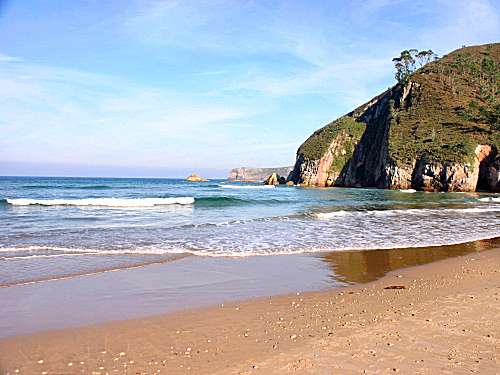 He went over the edge and hit a tree. Lucky? Well yes, the next one was another 70 metres further down the mountain side then nothing until the bottom!

On Saturday we arrived in the Square a little later than we wanted to and joined the "Ruta Costa Verde" run of 63 miles without even stopping, just riding straight through and onto the road to Llanes via Panes. We stopped for coffee at a petrol station along with a couple of Welsh riders on a Laverda 750SF and a Norton Commando. We watched a BMW filling up and, for some reason, he was carrying a spare silencer. Not sure why as it wasn't new and looked to me like it had dropped off, but not from his machine as they were both still fitted. Maybe a lucky find? Arriving at the town centre we were directed to the port area and parked alongside the docks.

Sandwiches had been provided once again, plain cheese this time, plus a drink from the same Blue Van which had appeared at every lunch stop so far and dished out the food in super quick time with no money changing hands, just a tick on your voucher. 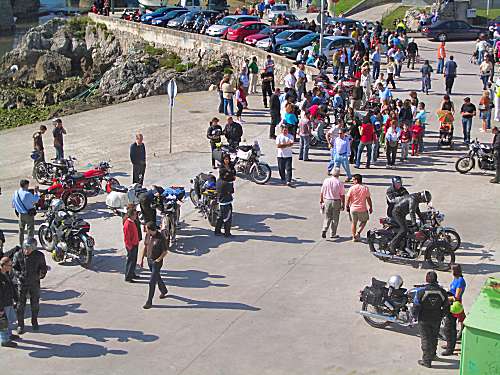 We spotted Jane in her Leicester Tigers shirt who has lived in this part of Spain for the last 20 years and she filled us in on the health of the crashed riders from Friday. It looked like there was only one rider who remained in hospital due to an operation but it perhaps was prudent. I had taken out holiday insurance for both myself and Helen through the Nation Wide Building Society. This insurance covers you for riding a machine of unlimited capacity as long as you wear a crash helmet. 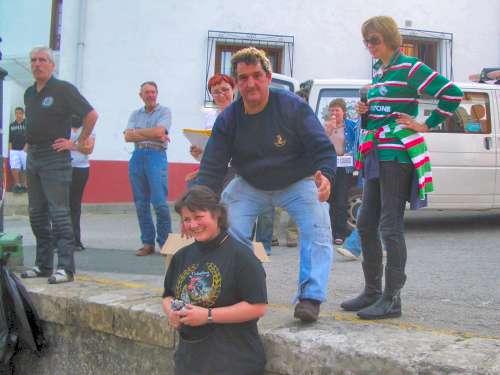 It would have been nice to have stopped here a little longer with the lure of blue skies and lapping waves over the nearby beach but Moto Piston thought we might get bored so they had arranged a Hill Climb event back at Colombres. And perhaps more importantly, a giant "Paella" cooked alfresco for 400 of us. They tell me the dish will cook for a 1000 people if required. 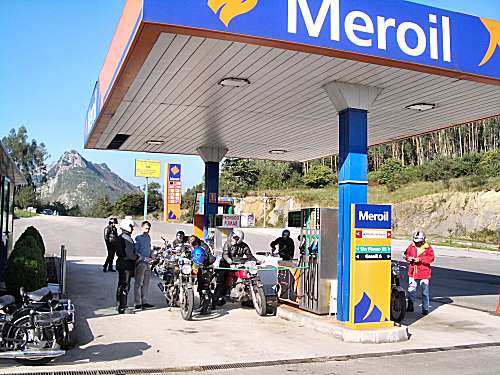 The hill climb was on the very same road we had arrived on just couple of days before with the start at Burstio and the finish at Colombres. The paddock was about two thirds along the course in the Tourist Office car park and three Velos had entered so we went along to find out how well they had done. Andy Smith riding a MAC gave his version of the event and was surprised there was no practice sessions, just get out there and do it. He thought he did better than John Worthington on his KSS who said he just enjoyed himself. Tim Sikkins, on the other hand, entered his road going Thruxton, which we had seen every day out on the runs, and his view was, by the finish line he was going "rather fast". Perhaps it was the 200 hundred metres or so he had to stop in before entering the main square or becoming part of the Paella that made it seem so! 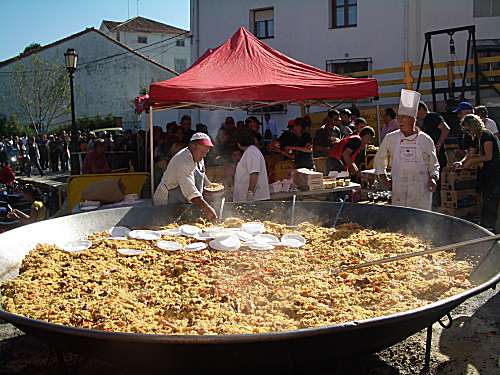 If you are wondering how the Hill Climb was marshalled, well it was the very same small dedicated team we kept seeing on the runs. These guys must have been run ragged all weekend long. If you are wandering about the other GB entrants the Lista De Participantes included Phil Harding riding a HRD and a JAP, David Jarvis a New Imperial, Ken Eldridge a 175 Mondial, Tim Turner a 350 Rudge, Glynn Trevor a Greeves, Harry Long a 175 Morini, Ian Keer a Montessa 175 and Dennis Bagshaw a 500 Manx Norton. 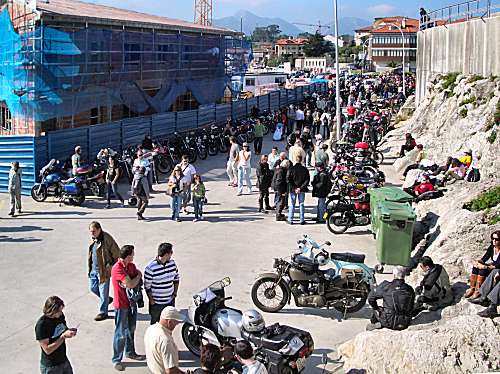 All was not finished for the day yet so we wandered up to the Pavilion and the Auto jumble which was free to rally entrants. Once inside it was very similar to any Auto Jumble with mostly parts for Spanish machines although David Lobb did find the BMW parts stall and made use of my magnetic bracelet when buying stainless pushrods tubes; just checking of course to see if it really was "what it said on the tin". 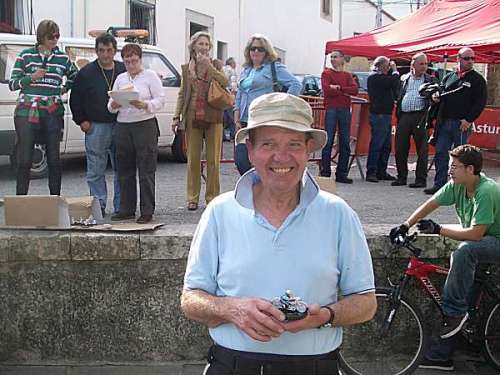 David gave me a little insight on how "Ruta Las 5000 Curvas" went for him riding a BMW R50 or was it an R60. Starting at 8.30am and visiting check points spread over something like 300 miles is quite a task, bearing in mind the check points close 1½ hours after the first bike goes through. With the rolling 25 years old rule a 1950s machine takes a little longer than a Kawasaki Z900 however it was a long days ride and he finished at 7pm. David said he did enjoy the ride but was unsure how well he did at that time. Will he do again next year? He said "yes of course". 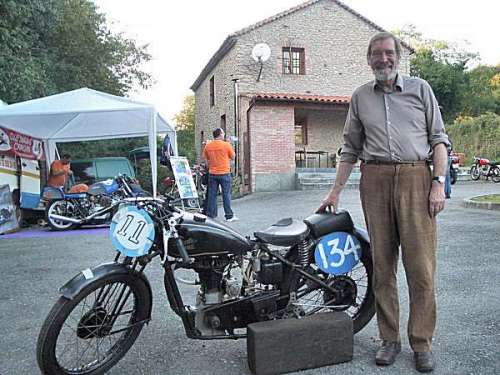 We met up with Serena from the Moto Guzzi boys and girls who really did have a day of it on the "Ruta Las 5000 Curvas". One of their team managed to go over the edge and into the ditch. It took some effort getting the bike out and, by the time they had, everyone was covered in mud. That is until the next town when they jet washed not only the bike but themselves as well. Along with two broken clutch cables I think they will remember the "Ruta Las 5000 Curvas" 2007 which, for them, finished well after dark at 9.30pm. 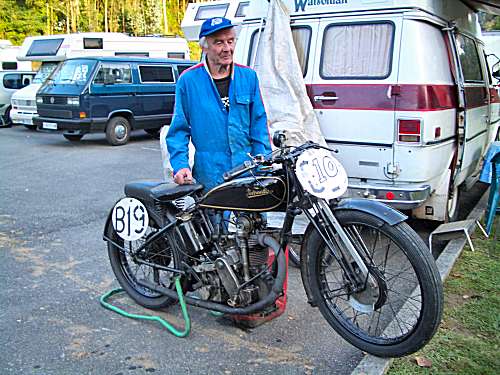 One other story from today was from one of the Ducati riders who had a lucky escape; he went over the edge and hit a tree. Lucky? Well yes, the next one was another 70 metres further down the mountain side then nothing until the bottom! In all cases no one was really hurt so it ended well, so to speak.

Our evening meal was going to be at La Parra trying out the cuisine because I remembered it was supposed to be very Spanish and "of the area". But after our usual wash and brush up back at the hotel we fell asleep a little too long and woke quite late. We raided the tank bag to find out what we had in the larder. Our evening meal consisted of a cheese sandwich from earlier in the day and local Madeline cakes washed down with a soft drink. We were tucked in by 10pm and benefited from a longer nights sleep. Of course, if tonight's La Franca Hotel meal had not been over subscribed we would have made the effort, but we did benefit from that extra sleep and tomorrow it was the "Ruta de Alta Montana" our "Farewell Route"