We do not usually meet this often but made a special effort to send Alan Jarvis back to Canada with a good impression of our drinking prowess. 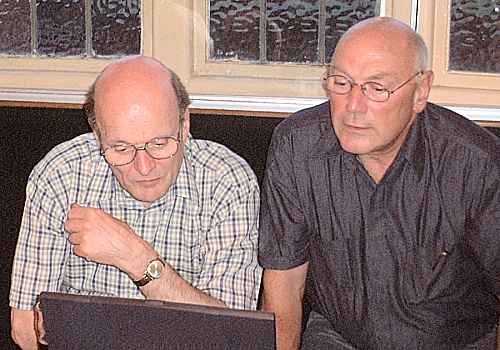 Dave Parry and Bob Nash were disappointed by Ben's laptop. They thought he said LAP DANCER.

When we arrived at the pub we were the only ones in the bar and we set to telling the old tales. I was engrossed in telling about the Devon holiday when Brian Porter was sent ahead to buy the food for the weekend. As I was recounting the story the bar became busy with customers and Dirty Eddie asked one who took a seat near us if we had occupied his usual seat. Meanwile I continued the story. At lunchtime we went to a pub where they had scrumpy cider. Bob Nash and Ken Stevens played the locals at darts and each time they won they were given another pint of scrumpy. By the time they returned to the campsite they were three sheets to the wind. They had been chased out of an orchard by pigs and almost lost their pants on the barbed wire fence. Bob all but passed out in the back of our tent while Shep was cooking enormous omletes. Eventually Bob sat up and said he would like one. He took one mouthful and resumed his corpse impression. Suddenly he again sat up and Shep, while still cooking omletes with one hand, grasped Bob's collar with the other and thrust him out from the tent over the stoves. Once Bob had got rid of the contents of his stomach Shep lowered him back into the tent and we continued with the meal. When the story was finished the customer who was sitting near to us said "That is a very accurate telling of the story." Although I had not recognised his face there was no mistaking Bob Nash's rich voice! Need I add that Bob was not drinking cider! 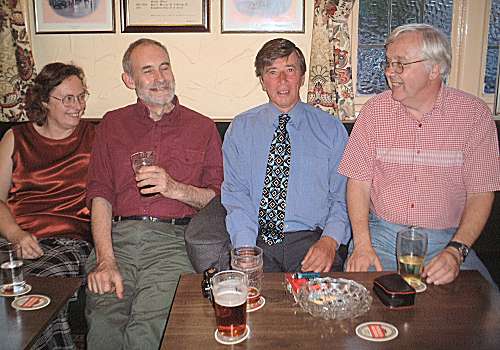 When Dirty Eddie, Alan and Wishbone got together it seemed like only last week since they last met. Oh, it was last week. 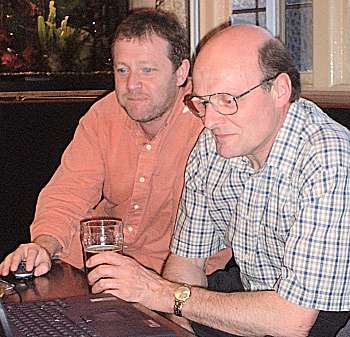 John Sim risked a spin round the CD without the protection of helmet and leathers.

Dave Parry stood by with his drink in case the computer burst into flames.

We hope that Roger Whiteman will take advantage of our hospitality when he visits England in September.