This was one that Alan Giddens led me to. We had a few in The White Swan in Oldham on the Friday night, stopped the night at Alan's flat and set off on the Saturday morning bright and early.

A pleasant ride over to Scunthorpe and put the tents up on the slightly slopping ground between the clubhouse and the steelworks.

This was the same site the Grange Farm Club used for the Iron and Steel Rally. We did the normal thing, tents up, go for a pint or two, a small nap before eating and then leaning on the door of the club until it opened at 6.00pm. Seats secured, ale in, this is it set for the night. 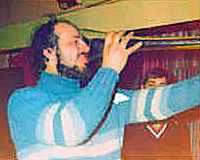 As you can guess from the name there has to be a yard of ale somewhere and at around 8.00pm they brought it out. My god this was a monster, a three pinter.

"Right lads, who's going to have a crack at downing this?" 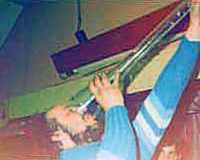 Well it came down to six of us. Out came a stop watch and away we went. I think I went third or fourth with the glass full of bitter shandy. None of the previous lads had managed to finish it. I had trouble getting down it and it got to a stage were my arms started to ache. It took me just over two and a half minutes! The next competitor did it in a quicker time than I did but just as he lowered the glass he threw up into the glass and they disqualified him, so I won the event by default.

The site is located by Tony Graves who was an organiser from the Grange Farm MCC and a founder member of Karoubie Klub, Scunthorpe. Tony still rides his rusty Z650.

After that I was the only founder/original member and rule 6 did not allow the new younger members to change the name whilst I was there so I left with the name and am still going in 2013 with the Black Pig Rallys.

Ah, the dreaded Rule 6. We've all been caught out by that one on a Saturday night!