Organized by Tamar MCC,
held at a variety of sites around Cornwall.

I was originally talked into going to the Tamar in the early seventies by some of my fellow Denholme and District MCC members, it seemed an awfully long way to go for a weekend, and the motorways were not all connected up in those days. I can't remember much about the first few I went to, but my diary tells me that the 1975 one was at Lower Lordwaste Farm Nr St Neot and that I called in to the Sabre Rally at Chesterfield on my way. Well, I was passing!

The problem I had doing long distance rallies then, on a Friday, was that due to having to work until 4.30 pm at least, I struggled to get there before closing time!

This photo will stop its dizzying scroll when you put your pointer over it.

Things are better now, because we have far more liberal licensing laws and better still I finish work at 12 on Fridays.

The Tamar has always attracted people from "up North" and it's no surprise to meet up with some of the Scottish Rally crowd down there.

The Rally got more and more popular and eventually when it was at Stoke Climsland at the end of the seventies it was all getting a bit out of hand. The Rally never stopped, it just became a lot harder to get any info about it! I had a gap of quite a few years until I met up with some of the Tamar Club at a Drum Rally and managed to get an invite.

The rally had then moved to North Cornwall on a proper campsite at Wainhouse Corner near Bude. I won long distance awards at the first few I did then, but I couldn't keep it quiet and first my mates from the Tees Tornadoes, then the Scotts arrived again to take the honours.

Click the curly top left tab to turn the photos over.

The Club always erected a marquee on the campsite and tea, coffee and home made cake was on offer out of the rain. Yes we had a few wet ones! Alan Kitson from the Dean Valley club used to have his own individual batch of cake made up sugar free so that he didn't miss out! There was always a barbeque in there on the Saturday night.

Despite the long ride down there, Saturdays were usually spent out on the bikes, especially if Jim Waugh of the Tees Tornadoes was there. One year, Phil Staitham came down from Edinburgh and arrived on the Friday. We told him we were going for a ride out to a superb café for breakfast on Saturday, and he said he would come with us. Jim was leading, with Derek Faulkner and myself. It was Phil's first experience of a "Waugh's Tour". After about a hundred and thirty miles of Cornish B roads we arrived at the café on Lizard Point for breakfast! He had just ridden nearly 600 miles the day before! 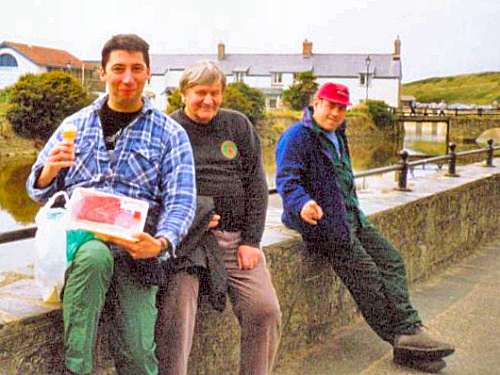 If riding the bike didn't appeal we sometimes took a bus ride up the coast to Bude to check out the shops ... er ... no the Pubs. It was a scenic route via Widemouth Bay and you get a completely different perspective on the top deck of a bus! We were held up for a while there at the bottom of the steep hill until an event finished. There was a group of lads in full leathers laid on skateboards being timed going down the hill. And some people think riding a motorbike is dangerous!

The motorways are all joined up now, but the traffic has increased so much that at times on Fridays you are quicker using back roads. My best trips down to the Tamar have been when I have taken Friday as a holiday and like 2008, just used A roads. When I was on flexi time I would stay with friends at Melton Mowbray and set off from there on the Friday morning, usually picking up the Fosse Way and then cutting across through Glastonbury to Taunton and using the B3227 across Somerset and Devon. This is actually a downgraded A road and is superb on a motorcycle. 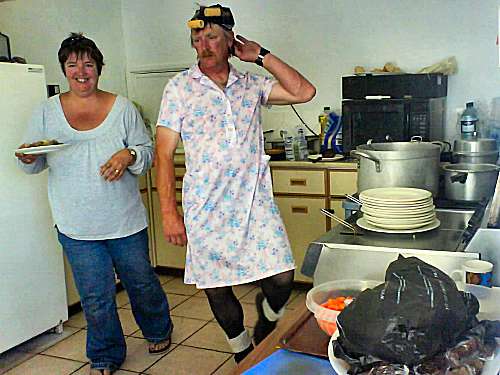 The Rally moved again for 2008 and is now not far from Plymouth, at a football club. 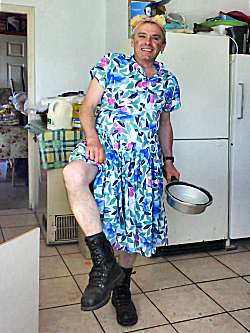 The Tamar Club did their own catering so reasonably priced food was available all weekend. The kitchen staff look a bit dodgy though!!!

The weekend had moved from October to June and for a change we had really warm sunny weather. I hope this is a new trend!