British riders easily outnumbered the raiding parties from any other single country when they descended on the Steel Horse Rally in Belgium.

Flying the GB plates at the gathering near Brugge were 107 machines compared with 71 Belgian bikes, 40 from France, 13 from the Netherlands and only seven from Germany.

The big British dominance was mainly the result of Continental attendance being strictly limited.

Organiser Jean Blanckaert explained that after the rally was started in 1968 it grew until a massive 2,000 riders booked in at the 1972 event.

So many people were impossible to control and the organisers were to limit invitations so strictly that a mere 100 riders formed the 1973 gathering. Growth since then has been carefully watched.

For the Dover 69 club it was a real triumph. They took the coveted award for the biggest club turnout with no less than 38 riders present.

A special award for the youngest rallyist went to one of their number - Anthony Ray, son of Mick and Rose who was just 33 days old on the Sunday!

A feature of the rally was when most of the 300 riders present took part in a police escorted procession which made an impressive sight as machines of all shapes and sizes went on tour. 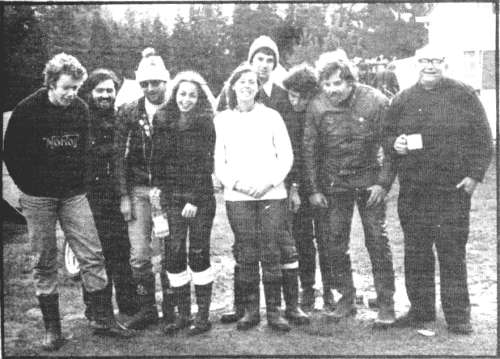 Some of the walking wounded from the British camp try to look human on the Sunday morning. Poor dears, not used to Continental bar hours.

Graham Mills says "Steel horse from left Dave Tibbles, Alan Knott, next two were members but I do not remember their names, next Caz, me in hat, Nigel in a bad way Robert and Rodney Taylor."

Report from Motor Cycle Weekly sent in by Graham Mills

Cannot remember the year I went to the Steel Horse. I remember getting a ceramic tile with "Stallen Ross" or similar on it.

I remember thinking we had stumbled upon a sacrificial offering ceremony when we were ushered into a hay barn for the crowning ceremony. We hadn't got a clue!

I also remember a German rider losing his pillion off the back of the newly launched Katana at full chat. He did live to tell us the tale in the bar at night. I have just Googled Katana and it says it was launched in 1979. I think I was riding either a Z500 Kawasaki or GT750 Kettle at the time.

We were members of Clifton MCC in Nottingham. If I can find my tile, I will scan it if its still of any interest to you. It's about 75mm x 75mm.

Of course it's of interest Steve! We are trying to recall those days, not forget them.

I think it was 1979 or 1980 went on the back of a Honda CB750 F1. Had borrowed Suzuki Leathers and a pair of Derry Boots. Was picked out of the crowd and Knighted as a Knight of the Steel Horse.

Did the tour of Bruge then got horrendously drunk.