After the challenge of the Yugoslav FIM Rally in 1972 and the joy of the IMTC Paritour to Portugal in 1973 I was hooked on summer FTing. I had bought Noddy Muggleton's Fastback Commando for the Portugal tour. It was fantastic after campaigning ancient AMC heavyweight singles. For the 1975 season it was adapted for its purpose with an Interstate petrol tank, single carburettor manifold from Gander and Gray, Interplod mudguard and Avon fairing, low level exhausts to give room for Craven panniers mounted sideways to keep the CG low. 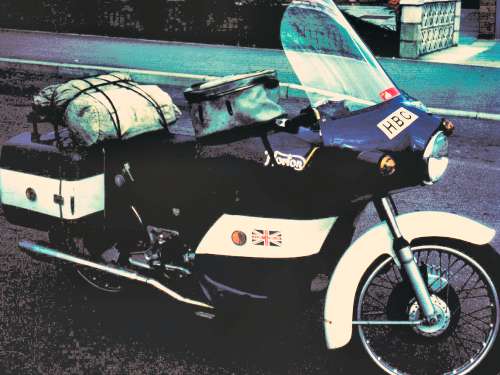 My enthusiasm induced Tony Bradley and Richard Hood to join me on the IMTC Partitour to the Lublin FIM Rally close to the Russian border. Tony was on his Norton 650 SS and Richard had a T150 Trident so we were set to eat the miles. 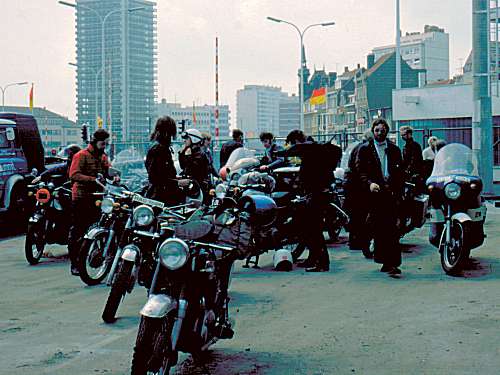 The problem with this rally is that it has almost disappeared from my memory. So if I tell you that Partitour groups always met up some time before the tour to get to know each other, it is a guess and I cannot recall it at all. We did meet up at the ferry and then chose if we were riding alone or with a few companions. The beauty of Partitours is that you can change about throughout the tour, even swapping groups through the day or taking your own route.

Our route took us through Austria and Czechoslovakia rather than the more direct route through East Germany. Austria was torrential rain all the way. When we arrived at our Vienna hotel and gathered for the evening meal one of the party steadfastly kept his hands below the table. When he finally reached for his knife and fork his hands were bright blue from the dye in his gloves.

We were well impressed by Prague once we had safely negotiated the tram lines. A guide appointed by the tourist office showed us all the best sites with wry comments about the Red Army being there to protect the Soviet Embassy from "enthusiastic crowds".

Not all of the motorcycles were the latest superbikes. There was at least one Honda 250 and Felix and his wife were on an ancient sprung-hub Triumph and sidecar. I cannot recall any problems with the motorcycles except an episode as we were approaching Lublin on the final day of the outward journey. The story is recounted on the Breakdowns Page. 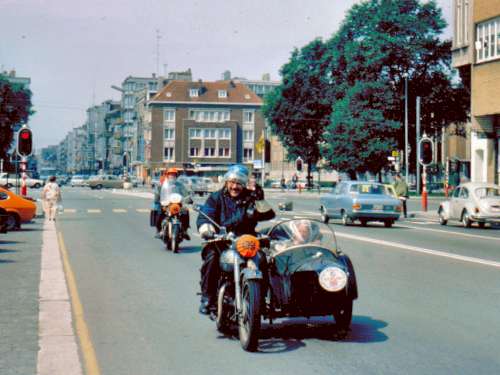 At the rally we were allocated our billets. There was a welcome evening at which we were serenaded by traditional singers and dancers while we tried to exchange stories with fellow rallyists. When the dancers bowed to leave they were surprised by the enthusiasm of our applause and gave an encore. This resulted in an even more enthusiastic response. After several escalating encores and ovations the zlotty dropped. We were being 'ironic'. 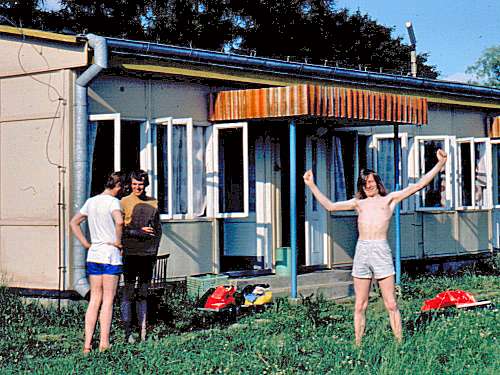 There were bus tours to rustic villages and a picnic overlooking the Vistula hosted by the Red Army. Our bus guide promised us yet more interesting excursions. "Tomorrow you vill go the concentration camp." she announced to gasps. "You vill enjoy it!" she promised in a surreal way that brought hoots of laughter.

The route home was more leisurely and I recall the stop at Wurzburg where we discovered the Bier Gartens. We were all extremely hung over the next day when we struggled round the local castle. 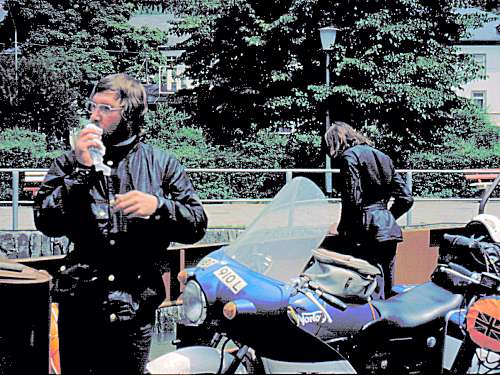 Richard was very puzzled when we boarded a river ferry for the second time within a few hours. "Haven't we just crossed this?" he asked, "Why are we going back?"

We explained the geography to him and that these were two different rivers, the Rhine and the Moselle.

For some reason I cannot recall, Richard went ahead of us when we reached England. On his last ten miles to Kibworth where he lived at that time, off the M1 onto the A4304 (was the A427 then) he put the Trident into the ditch and had to call his father out for a lift.

The Partitour members met up again in the autumn to show photographs and renew friendships. If only I'd written it down at the time ...

We went to Lublin from Budapest in 1975 to FIM Rally. I on my CZ-175 Sport Motorcycle and my colleague on MZ-250. I remember that at this event we got to know many people, which initiated my initial adventure in the Polish language, and now I have lived for over 28 years in Poland. Currently I have a BMW K75 motorcycle but soon I will get a gift from my son (he lives in the UK today) and it's a BMW RS1150 Adwenture.

I hope, that this year I can visit some interesting places. Already gearing motorcycle and equipment to start the season.