I cannot remember a bloody thing about it.

These are the only mementos I have of the event.

Luckily Phil the Spill was there as well and recalls a little bit more with photos that capture the ... er ... blur. 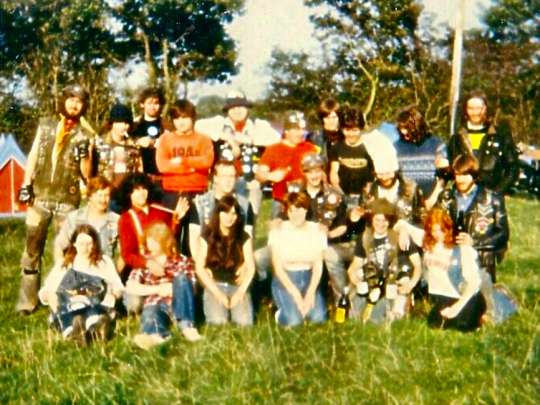 Another glorious late-Summer weekend. Warm enough so that you didn't need a marquee. Which was good really, because they didn't have one. There was a scaffolding framework, covered with tarpaulin, which housed the disco and a tabletop Space Invaders game somebody had obtained from a pub. This DIY appearance became a bit of a Norman Rally trademark - even a stage was constructed for bands a few years later. The game took a little work before they could get it to work, as the generator's output was variable depending on how loud the disco went, but it provided entertainment for the weekend.

The organisers informed us that they hadn't been granted a licence for the rally and gave directions to the nearest pub and off-licence, which weren't too far. I think there was a burger van on site, but can't remember for sure. Some of us found a derelict milk float in the corner of the field and proceeded to play around on it like a bunch of kids.

The organisers decided to be different, so there were no badges for this rally and we were given vinyl bike stickers instead. They rectified this in later years by means of a year bar for the badges that followed. Nowadays we would be appalled by the lack of basic rally facilities, but we had an enjoyable Friday evening.

On Saturday there was a mass shopping trip into Hastings for food and drink for the night, as you might expect. There was a wonderful store selling all sorts of camping equipment and clothing that was well attended. The Trading Post was its name - I don't think it is still in existence. Pete got, of all things, a chef's hat, which he wore to rallies for quite a few years.

Back to the site, then and the games were held. Alongside the normal pulling/throwing type contests were races involving stilts, skis and such. The host club allowed themselves to enter some of them, which was a bit unfair, as they had obviously been practising.

Anyway the evening wore on and the night's entertainment (the disco) started up again - the game had been removed as it became unreliable. Everyone was happy with their own provisions and had a good time.

As I recall it was a perfectly reasonable day on Sunday for an enjoyable ride home.