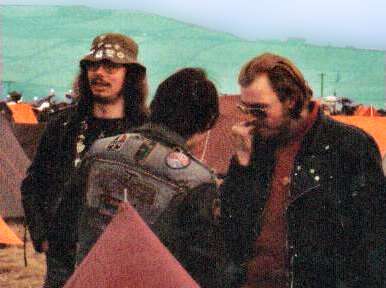 The locals seemed to speak a different language even when they were sober.

West Hartlepool looked a bit past it's best in the seventies, very run down with a lot of derelict properties. The Rally was held to the North near Crimdon but you were guaranteed a good night out in any of the pubs or working men's clubs, as this was before the mines were closed and working shifts in a mine under the North Sea seemed to give you quite a thirst! However you needed a sense of humour, and sometimes an interpreter would have been handy, as the locals seemed to speak a different language even when they were sober. We used to get a fair crowd of both Tee's Tornadoes and Dean Valley MCC there and the Tees lads speak a similar dialect so could help out with any misunderstandings!

The Vaux or perhaps Federation beer seemed to upset the stomach of Jeff Clift (Dinsdale) from the Dean Valley Club because when I offered him a nice fried breakfast on the Sunday morning he suddenly decided he needed to be outside the tent! I should have realised that a sort of greyish green is not a normal colour for a face! He should have been drinking Newcastle Brown; he wouldn't have woken up in time for breakfast then!

Things have changed up there now, with the building of the Marina etc, but back then we were warned not to go paddling at Seaton Carew or walk barefoot on the beach, as those nice brown pebbles weren't really pebbles! The beach further up at Blackhall Rocks was where the final scenes from "Get Carter" were filmed with the big buckets going out on wires to a pylon in the sea and dumping the pit spoil (or any dead bodies that happen to be in there!)

In those days the locals used to go down on to the beach and collect the coal that got washed up. The sea and the sand was black, I don't suppose it would be allowed now!

I remember Dinsdale well. He wanted a go on my Norvil Commando. I said if he was able to start it he can ride it.

Now, because of the rear sets and a stupid compression ratio, it was a bugger to start. It took Dinsdale half an hour but he got it going. Boy was he worn out but he got his go on it.

Where are you now Dinsdale?