The 5th Kurland Round Rally 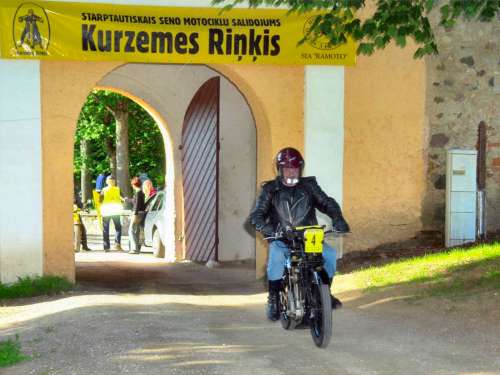 Saturday morning breakfast at 6.30 and the start of the timed section of the run at 8.00, a minute apart.
I was away at 8.04 and on the good road at the start soon caught up the Finnish lad in front on a 1929 500cc sv Raleigh. His map reading was a little better than mine. It's a game having to thrutch with glasses on a bike with no tick-over so I just followed through the forests and check points. We stopped for coffee on the coast near Berzciems about 30 miles out. Up to this point the only building I had seen was a watermill, but as we now headed for our lunch stop at Roja there were more houses with huge wood stores. Winters must be long and cold here. People were drying hay on pyramid stands. 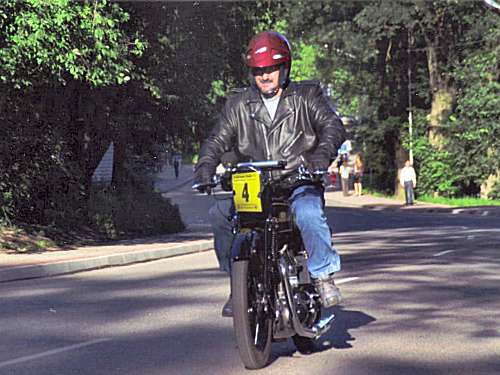 When I arrived at the port of Roja I found that I had lost my time card. We pulled into the parking lot reserved for us and the bikes were guarded for us by our out riders while we had a walk about. There was some sort of village festival with Neptune taking place on the beach and a small market had been set up. The school canteen had been opened up for us and a good lunch was served. The Morgans really drew great interest from all that saw them. They had probably never seen anything like them before and here were four. Rob Dury had purchased one in Germany and took it straight to the rally without having done anything to it. Out came mobile phones and cameras, young children were placed in them. Good happy event but now we had to press on to the cape of Kolka where the Gulf of Riga joins the Baltic. 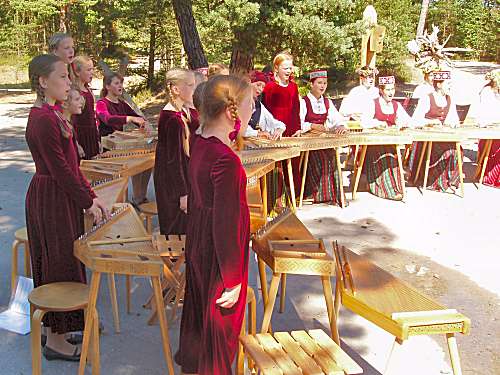 On arrival at Kolka there was a concert of local music by three generations of women in traditional dress on some type of things that I can only describe as being zither like. I have never heard anything like it. Unique. We were all standing anyway and they got the best ovation that a group of people could give.

From a video by Janis Mezinieks.

We then had to push the bikes and Morgans onto the beach for the group photograph. Being a national park it was stipulated that no engines could be started as it would set a precedent that could lead to others riding off road vehicles there.

We rode back to Slokenbek through Slitere National Park. Great scenic views, some bumpy roads, some dirt roads. The rally finished with a dinner/dance and prize giving back at the estate. Every participant received a hand crafted mug with the Kurzemes Rinkis emblem moulded in the clay. The prizes, photos and speeches out of the way the buffet was brought in along with two barrels of lager. Everybody had their fill. Nobody abused it and I had a fantastic time with people I had never met before but will meet again. Sadly it looks as if the 5th Kurland Round Rally was the last.

Sunday morning breakfast 9.30. It rained during the night and three bikes including mine fell over as the stands sunk. Luckily damage was confined to a broken clutch lever and bent foot rest. As the ralliests departed, riders from 10 countries all going home happy, a few of us that were left went on to the Latvian version of Hollywood, a film set with building set up for filming all manner of historic costume dramas. A couple of lazy hours spent over lunch then time for final farewells and the return home.