The 5th Kurland Round Rally

Held on 13th-15th July 2007 at the Slokenbek Estate, Milzkalne, near Tukums, Latvia. 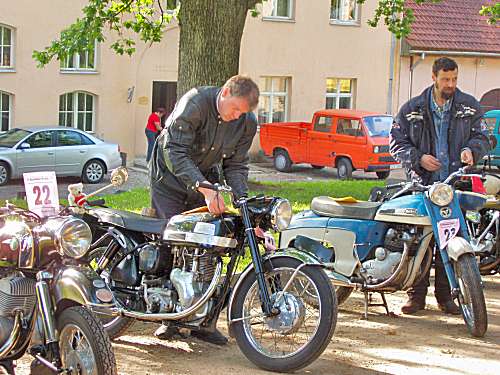 Where to start on this one? Juris Ramba I have known for a period of about 5 years via the Vintage MotorCycle Club. A few years ago he unearthed a 1916 vee twin Sunbeam motorcycle in Latvia and needed help with parts and information. Being the owner of a 1922 version of this machine and a member of the Marston Sunbeam Register I was probably the best person to help him in what ever I could. I was invited to the rally in previous years but could not make it, but as this year was probably the last year that it was to be held, I just had to pull all the stops out. I had in the garage a choice of bikes that were eligible to participate so I singled out a 1929 500cc Sunbeam but it was a bit of a dog to the eye so a nine week make over took place which left me very short of time to give the bike a good shake down.

Because of the distances involved (a rough estimate of 2,000 road miles) and the security issue I decided to use a Volkswagen Transporter which would also carry a backup bike, a 1933 350cc Sunbeam, all the spares I could need, food, clothes and I might as well make my return trip a booze cruise. My planned route would be the ferry from Harwich to The Hook of Holland, overland to Kiel then the ferry from Kiel to Klaipeda in Lithuania and overland to Riga then return to Klaipeda by a different route (which will become obvious later) ferry to Kiel and drive down to Calais and finally the ferry to Dover.

From a video by Janis Mezinieks.

Saturday July 7th 4.30am left Wolverhampton and drove to Harwich an uneventful trip as was the ferry crossing. Disembarked at 4.30pm local time and drove to Bremen. It was now 21.30 pm and I needed a bite to eat a drink and some sleep. I turned off the E37 and found a very nice hotel in the village of Achim. The morning dawned brightly and after a superb breakfast I was on the road again. The Dutch radio station I had been listening to Arrow FM was just getting out of range and not being able to find anything else I was now reduced to some cassettes that I had not played for over 20 years. The Alan Parsons Project, Yes, Rick Wakeman, Lovin' Spoonful, and some early Genesis. The next thing you know I was at Hamburg and just entering the tunnel under the river Elbe and I had this strange sensation. It's difficult to say what caused it, the squareness of the tunnel, the lighting? It was akin to being given an anaesthetic, very un-nerving at 60mph. Before long I was entering Kiel it took me around an hour to find a small bed and breakfast to spend Sunday night. I dumped everything and walked around the town and watched the Germans doing what they do best, window shopping, eating cakes, eating ice cream and drinking coffee. After a couple of hours of this I did what English people do best I found a bar, had a meal then found another place to drink, an irish pub. There were a couple of English lads in but as they were talking complete twaddle I didn't make myself known to them. A couple of large beers later it was time for bed.

Monday morning after having a good breakfast at the hotel it was straight down to the docks. I had to bee there at 10.00am three hours before the departure time. A short time later three Morgan three wheelers arrived; Dave and Jenny Pittuck, Oliver and Alison Brookes and Gary and Barbara Caroline. We were just waiting for Colin (the chap I was going to travel with) to turn up. Colin had over-nighted in Flensburg and was driving the relatively short distance down. Colin had had his wallet stolen on the ferry from Harwich and he was stopped from boarding the Kiel ferry as he didn't have his vehicle V5C with him. So we did all we could do for him, had a whip round and left the poor chap with enough cash to get home. The ferry sailed at 13.00. We sat in the bar chatting and eating some home-made cakes (thank you Barbara) washed down with a couple of beers. The whole coast is dotted with hundreds of wind turbines and I have never seen so many jelly fish. The sea was like a mill pond and looking on the ships charts displayed on the wall you could see the ships course plotted out and the direction changes and times. Also areas where munitions were dumped and areas which were mined during the war! I didn't sleep well that night. 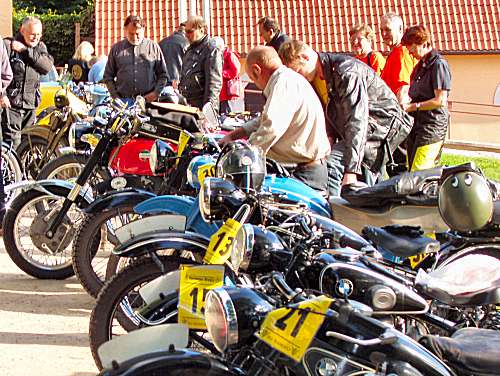 The next day around mid-day we entered Klaipeda harbour. A prettier dock I have never seen. On the left entering is your normal dockside, but on the right it's a nature reserve totally unspoilt. After clearing customs and emigration I left the Morganisters as they had pre-booked in the local town and I was booked in at Riga. Within a mile I had taken a wrong turn and finished up going down some side road that was being dug up. Then once clear of that I realised I was heading south when I should have been going north! Time to buy a local map. Once I had that what else could go wrong? Back on course making a steady 50 mph with time to look at the nice country side. Then we came to the road works, 18 miles of it. It was a construction site. Lorries tipping aggregate, it would never be allowed in any other country. It just would have been shut. The maximum speed was 15mph. The rest of the run to Riga was uneventful with me arriving at the start of the evening rush hour. I spent the next 3½ hours trying to find the hotel. Eventually some type of military man, maybe policeman, with the aid of two books, located the hotel for me. I spent the next 2 days wandering around Riga. Nice city, lots of old buildings, many look abandoned and derelict, dirty windows, flaked peeling paintwork, probably untouched from the day they were built. But walk by at night and there are lights on. And it's not just in your local town. It's spread like a cancer all over Europe - stupid young kids with aerosol paint cans - graffiti everywhere. 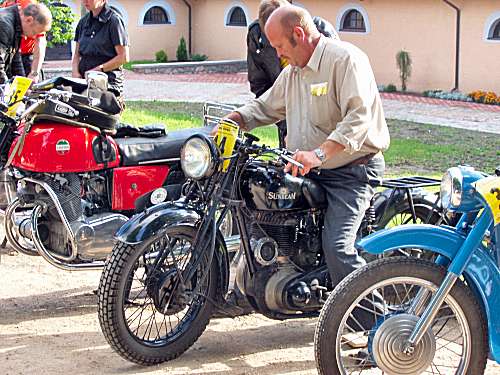 The morganisters arrived Thursday afternoon and we hired a mini bus to take all seven of us to the organisers' informal diner at the Lido in Riga where we met up with Juris and his family, an American couple whose names escape me, and Graham Rhodes (son of Ivan) and his companion. The four had flown into Riga for the rally and Juris was providing a Harley panhead and a viper clubman for them. 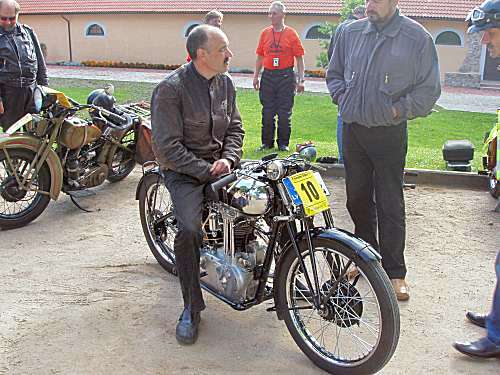 Friday the 13th, first day of the rally, meet up at Riga Motor Museum at noon, while the morganisters had a quick squint around. I took the van and located the place again. No bloody street signs, and everybody you asked didn't know where it was. I eventually found the place and was able to lead the group there where we had lunch and a tour around before being shepherded through the rush hour traffic by the local motorcycle club acting as outriders. These lads, most of whom were mounted on bloody great vee-twins, were marvellous in and out the traffic, up on the pavement, holding the traffic up to let our procession through. Ignoring the red lights we were guided to the rally base at the Slokenbek estate. We were no sooner there than it was time for registration, scrutineering and the police escort to the near by town of Tukums for the hill climb. One run around the course as a pack, then two timed runs against the clock. Proper electronic set up. The loudest bike was a FN racer. I was fourth away and had a misfire which cleared after 3 or 4 seconds. The eventual winner was 1930s BMW mounted. We returned to Slokenbek for the evening meal, speeches and toasts to aid which Juris placed six bottles of Jack Daniels on the tables. We finished up outside in the courtyard in the early hours. The mosquitoes were out in force around your heads like halos.

Report continues on the next page.