This was quite a rare event being held in Surrey, an area not exactly noted for rallies.

It was September and joining me were Trotsky, Cal, Woolfey and Woodsey. 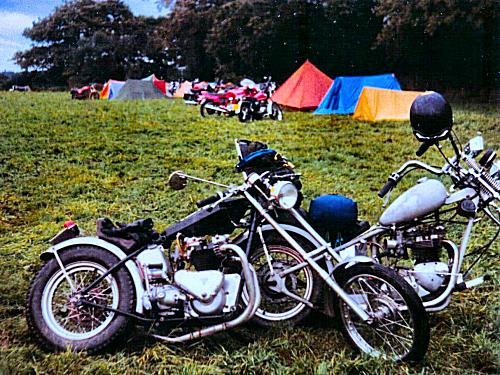 We had a tip off about a pub which was quite a walk from the site but which held real ale. When we arrived there were four or five different ales on, which may not sound like a big deal these days, but in 1981 this was like discovering the holy grail! Of course pints at the higher end of the strength scale were rapidly consumed. This was all well and good until we attempted to find our way back to the site. With many wrong turns and attempted shortcuts across fields we eventually arrived back at at about 2am! 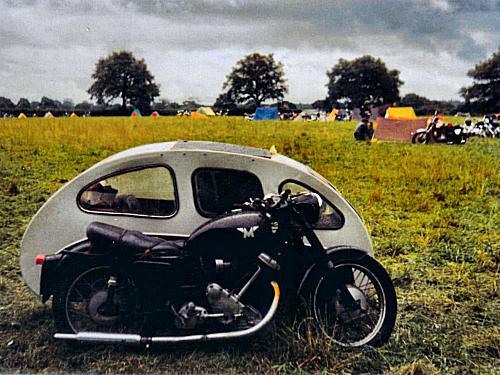 Of course the next night we repeated the feat.

I must have found the Pub because that's all I can remember. Asked the wife Anita, she remembers the Rally but that's all. Must have been a good 'un.

I've got this down as the Knight's rally in 1978, it may have been run by Roger but that's how I remember it.

LtoR. Kelvin Clouting on chair. John Jocys standing. Pam Pitts in bikini top. Sue King standing behind her. Dave Gladstaines next to Sue. Les Hobbs sitting in front of Dave. John Flitney facing camera in blue tee shirt. Paul Mullis in orangey tee shirt. Steve Cawthorne next to Paul. Sue Hawes next to Steve, Micky Hamblin next to Sue. Nigel Sisson in sunglasses and Alan Bone in right foreground. I think the belly on the left must be Roger Halfyard.

Sorry I don't know who they all are. It may be Jenny next to Nigel and it may be Marion Watt and Charlie in front of Alan Bone.

Yes that is Jenny Haines sitting to my left. Is that not Carl Hulme sitting at the far end though? He was certainly there.

The girl on my right is not Pam Pitts but my girlfriend at the time, Sonja Van Vuuren. Sat on her right, just out of shot, is Roger Halfyard, then Kelvin Clouting then with back to the camera is Helmut Schenkel from Troisdorf MC Koln, you can just see the frame of his glasses. Then on his right Nigel Sisson.