This was one of those Rallies that I just had to do. I was looking through the multitude of rallies scheduled for the last weekend in July, when I saw the location of the Iron Ore. It was to be held in Egremont just down the road from where the Sidecar Safari and the Bulldog Rally used to be held. This meant I could have a ride across to the west side of the Lake District and spend the weekend in a part of the country I rarely visit. 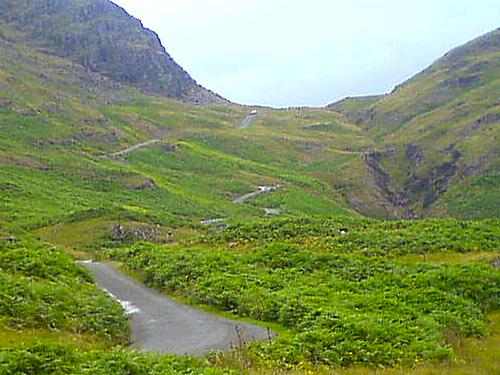 The trip across from Bradford was via the A65 towards Kendal then to Windermere, Ambleside, and over the Wrynose and Hardknott passes. This was despite saying that I would never take my R100RS over them again, due to its narrow handlebars, and the high gearing! All went well however, the cars didn't get in the way too much, and it kept dry most of the way, although there had obviously been a lot of rain recently as the road was covered with gravel and more substantial debris washed out from the surrounding gullies.

The Rally venue was well signposted, but in any case you could see the tents on the rugby pitch from the main road.

I booked in on arrival and got my badge, date bar, and a wrist band to gain entry to the clubhouse. We were allowed to camp on the pitch, so it was nice and flat and well cut, there was lots of space too as there were only about 75 tents on Friday and just over a hundred on Saturday. We had use of the superb new changing room facilities too, so no shortage of toilets and some nice warm showers. 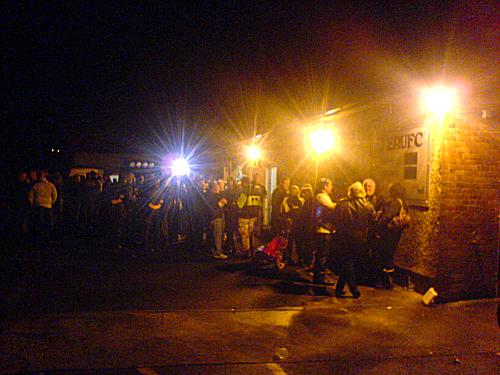 That evening we decided to walk into town and check out the local bikers pub, (the Central) It was quite lively and we stayed longer than we intended, but we managed to get back to the rally site to catch the Friday night band "South Quay".

Saturday started wet, so after a bit of a lie in we again went up into town, but this time to raid the Co-op! 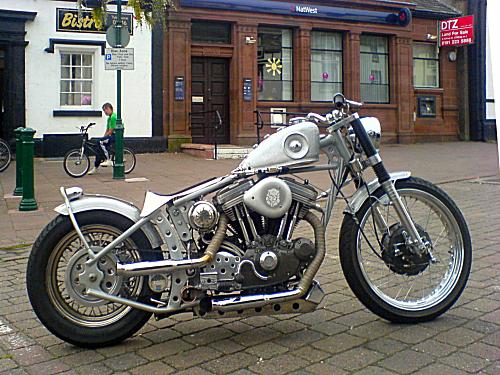 There was an interesting custom Harley parked up in the town centre, very nice, but I wouldn't fancy riding far with that seat.

Back on site there was the usual range of cruisers, and trikes, but a couple of nice classic bikes had turned up too.

In the afternoon I went with Roy Watkinson, and Trevor Keane to visit Tom Ayton who was one of the organisers of the Sidecar Safari and Bulldog in the seventies. He no longer rides a bike, but it was good to meet up and talk about old times when the West Cumberland sidecar club ran the rallies over there. We talked him into coming over to the rally for a few drinks that evening too. 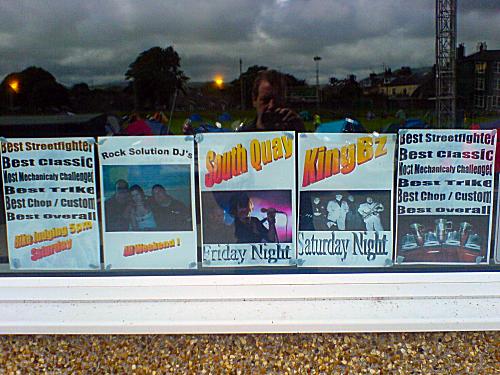 The central had sold out of real ale so it turned into a pub crawl to find something decent to drink; most pubs just seemed to do "Creemflow". Back at the site the club house was full to overflowing and it seemed as though a lot of locals were also out enjoying the rally, I am sure most of the young ladies there would make good winter rallyists if they were warm enough in the skimpy amount of clothing they seemed to be almost wearing! 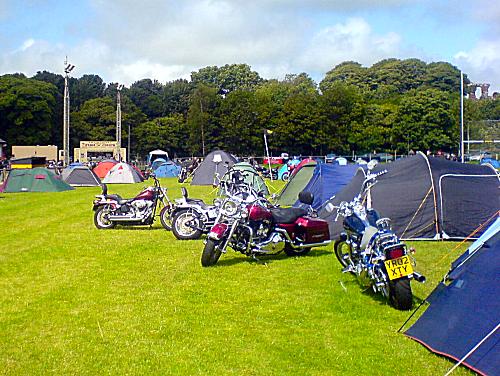 Sunday was dry again and we got off fairly early, I followed Roy part of the way back, past Cockermouth, then along the A66, I turned South via Kirkby Stephen, to Hawes then over Fleet Moss to Buckden and down through the Dales to the monthly BMW Club meeting at Cracoe village Hall.

Another good weekend 250+ miles with no motorways and lots of B and unclassified roads. I suppose I will have to try to go back, as I never got round to visiting the old rally sites like I intended to, or went Pass Storming like in the old days. Maybe next year!

I am one of two organisors of the Iron Ore rally held in Egremont. This year's is number .

In 2009 I spoke to a guy from Lancaster who was enquiring about tickets for the IOR who mentioned he hadn't been up this way since the 70's when he visited the Sidecar Safari rally. I replied I hadn't heard of it but I would only have been in my early teens. Then I spoke to a fella from Darlington who told me the same story about coming to Egremont / Moor Row in the 70's.

So this triggered my nosiness to find out more about it. thus ending up on LPMCC.net

So it would appear there's a couple of old hands blowing off the Belstaff and returning to the West Coast hope we can offer them a good as time as they had back then.