The 2nd IOW British Motorcycle Society rally was held on the Isle of Wight on the April bank holiday
with me Woodsey and Jim in attendance.

I cannot remember there being a beer tent but we had several ride outs over the four days the rally was held and, yes, someone actually lived in the tent in the bottom picture. 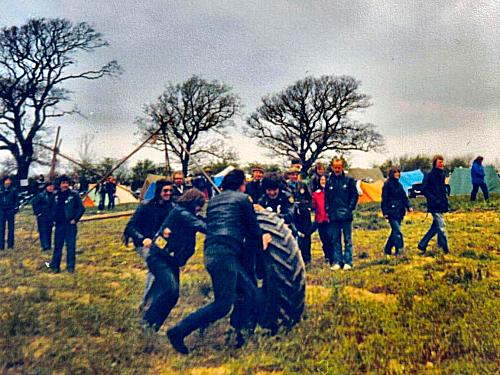 One of the silly games involved hanging an FS1E and rolling people down a hill in a tractor tyre.

I cannot remember to much about 1982 except that it was on Easter bank holiday on the Isle of Wight at a different site to the previous year. 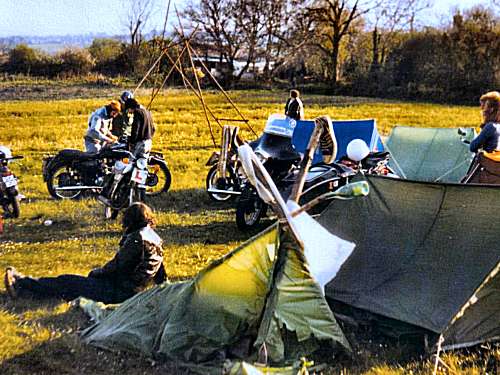 Like you I dont remember much about 1982, but I was part of the organising committee and the huge combo in the bottom picture is my BSA A7.

I have a 2nd Isle of Wight Rally badge like the one above.

The memory is a bit vague now but I think I went twice, 2 years running. One was definitely Easter. I went with friends Julian, John, Marcus, Dummy and another John as I recall, all from the Evesham area. I rode a BSA A50 500, the others were on 2 Triumph Bonnies, and a Commando. I think one of the Johns was pillion on my BSA.

Don't recall having a proper tent but we took a big piece of plastic and slept mostly by the fire in our sleeping bags - weather was kind luckily.

Absolutely loved it - the ferry ride made it really magical.

Wish the bike culture had remained like it was then - the new learner laws have wiped out a sub culture that centred around certain types of pubs found in every small town - the Charlie in our case!

I remember being pissed on Forest Brown ale, getting violent stomach cramps and barely making it to the toilets before my arse exploded! Great times!

I remember a pavilion type of building with a band or music playing on the site. We awoke one morning, voices croaky with smoke and giggled at some bloke from London singing "Is Vic There" with a strong regional accent. Weird things stick in your mind - he'll forever be locked at that age in that place for me but I suppose he's grown older too! Hopefully he's still riding - I know I fucking am!

I was at the rally with you Andy. My name is Julian and you're right; fucking good time had by all.

Department S I think it was. Every time I hear it I have a flash back, broken rear wheel spindle, rat bike prize, dying fly...

one of the - Johns

Prepare to relive more of those great memories, John. And while they're passing before your eyes and ears, write them down and send them in.

I was part of a group based in Sussex who were regular visitors to the IOWBMS Rallies back then.

Most of us are still alive (just), still get together as a group, and are still riding bikes, and just yesterday one of the guy's suggested that we all return to the Island in 2020 to relive and rekindle some of our memories of the early 80's.

With that in mind it would be great to hear from anyone who was a part of the IOWBMS back then.

I see that Steve Dear has posted on here, so Steve if you read this then please get in touch, it would be good to catch up.

Other names I recall are Gary "Tex" Perkins, who I think may have been the club secretary, and "Chivvy" Chivers who rode an outfit and had a tendency to let off crow scarers in the beer tent !

A name that escapes me is that of the young lady who rode a beautiful chop called "Elrick", my fading memory tells me that she had a connection to one of the bike shops on the Island.

Anyway, if anyone from the IOWBMS reads this then
we would like to hear from you.