November just outside Devizes in Wiltshire and is still held today.

The weather was windy and overcast. We done a ride out on Saturday morning to Devizes to see the Wadworth Brewery and returned to the bikes which we had parked near the war memorial to find an angry traffic warden putting tickets on the bikes! 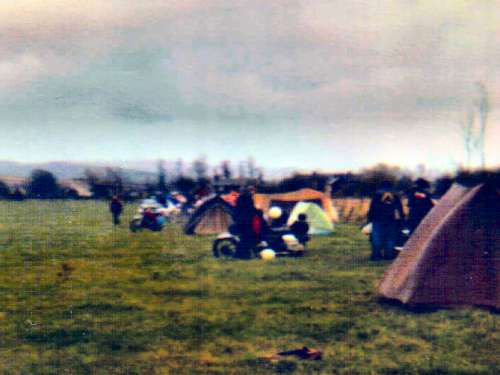 The beer tent was full of Wadworths beers on gravity dispense from wooden casks which had been delivered to the site by a dray pulled by horses. Not learning our lesson from the night before we layed into the old timer at 1053og again! This resulted in me climbing the marquee tent pole and doing a moonie. No sooner had I descended to earth I was in a line up with my jeans and pants round my ankles to have my arse pinched by the majority of women there. I won the contest and the prize of another pint of old timer.

I can remember the run back home the next morning as being rather hazey!

In 1981 the ride up was freezing and there was a frost Friday night.

The rally was held at a different site to the 1980 one. It still had a Wadworths pub on the site so me Woodsey and Paul March wasted no time in hitting the strongest beer we could lay our hands on.

It is now held on a different site on a farm overlooking the Marlbough Hills on the way to Devizes. 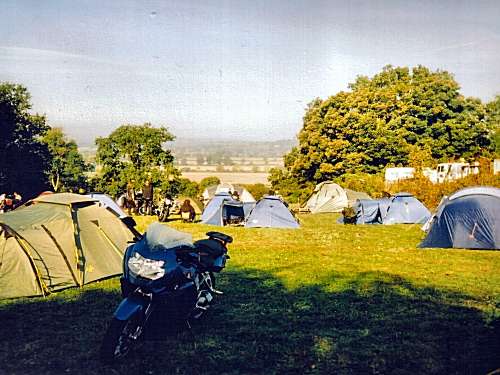 I usually meet up with some friends from the Unpredictables from the Isle of Wight and go down to the local pub via about 2 miles of footpaths away on Saturday lunchtime.

There are two marques; one sells good food at decent prices and the other has the bar that has good real ales and the killer orange coulored scrumpy which I always get completely plastered on both nights.

A rock disco is always there and there is acoustic live music on Friday and more rock bands on Saturday. 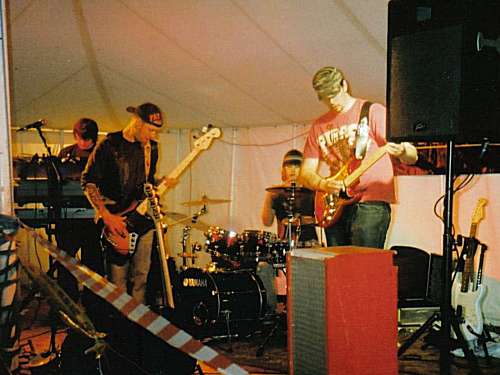 There is always a bonfire on Saturday night.

In 2009 was the silver jubilee of the Gert Bustards which is named after a bird which almost became extinct but has now been reintroduced on Salisbury plain.

The rally is held in October.