The Dwyle Funkers Rally is organised by MC Dwylefunkers, which is a rally club that was originally mainly based in the North East of England.
It now seems to have members nationwide. Some of the original members were very well known on the Rally scene in the mid seventies; such as "Big" Steve Brackley, Chris (the piss) Pitts, Boris etc. The Rally now seems to depend on Sam Talbot to keep things going.

I can't remember what beer they served, but there was a red label and a green label on the pumps so they were christened leaded and unleaded!

The first Rally was in 1979, but as I can't even remember where it was held I can't write about that one! I do remember having to go to Haverford West for a couple of years, but the most memorable time for me was the period it was held at Llantilio Crossenny, which is midway between Monmouth and Abergaveny. The venue was a proper campsite, which was owned by a relative of Alan (the Banker) Barclay. The house at the top of the field was owned by Russell Grant, but I can only think that he foresaw the noise and traffic caused by the rally and stayed away when it was on because I never actually saw him! 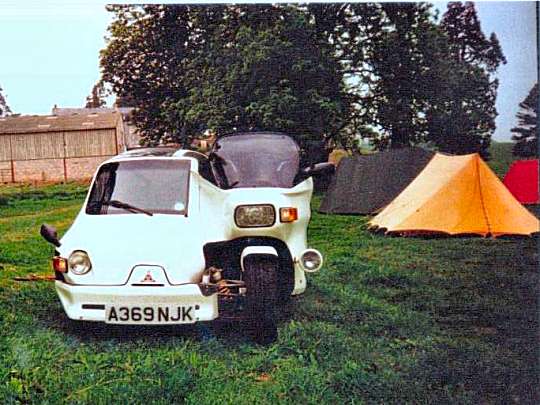 The Village Pub was the Hostry Inn, and we had some good nights there, when the landlord was in the right mood. Some years however he seemed to make hard work of it, and struggled to cope with the number of people there. 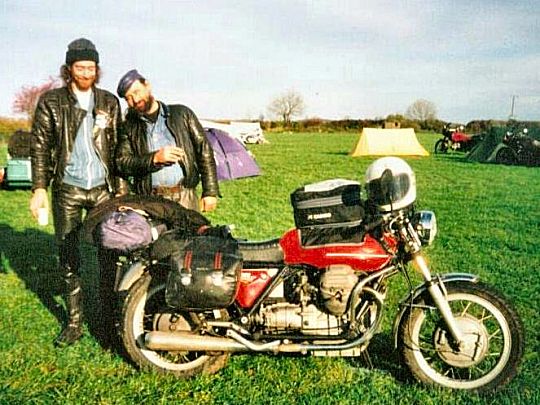 I can't remember what beer they served, but there was a red label and a green label on the pumps so they were christened leaded and unleaded! I suppose it was inevitable the rally would have to move when more and more people started to use a mini bus service to get to the pub in the next village. 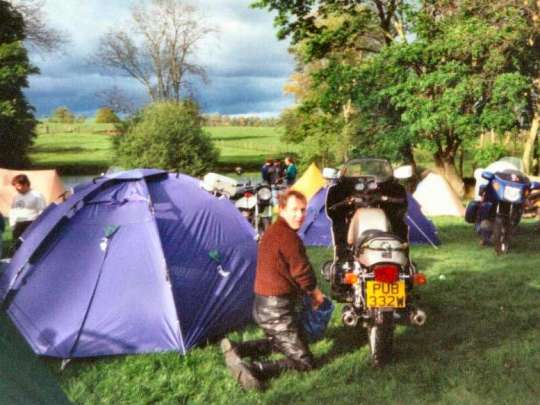 Ted Trett washing his bike at the Dwyke Funker in 1992.
Heather MacGregor

Over the years I have had some good trips down the A49 to get there, but not including the year I managed to have two punctures going round the Ludlow by-pass, or the year when on my way home a spring broke in my bikes gearbox. I was stuck in second gear, so I had the choice of being recovered, or carrying on but with a cruising speed of around 35mph. I chose to carry on and just pretended I was on a moped! It's incredible the things you have time to see at that speed, but as it is about 180 miles to my house from Hereford (where I broke down) I must admit that I was getting a bit bored towards the end! 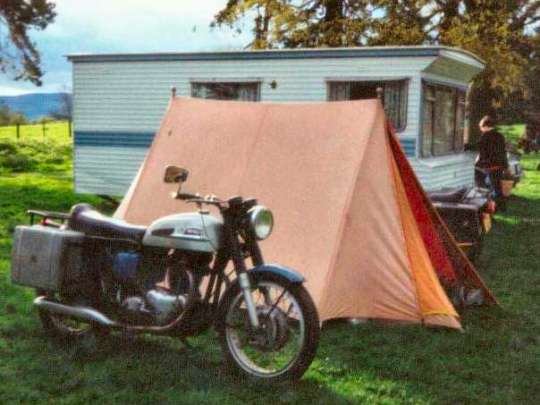 There is a large church in the village, and one year Sid Beaumont and I went in to have a look at the impressive bell tower which is supported by timbers 60 ft high. I decided to put a couple of coins in the collection box, and it fell off the wall, spreading coins all over the place. Just as this happened a woman walked in (probably one of the church wardens). Sid being his usual helpful self immediately shouted "Now you are in trouble, make a run for it". I was relieved when the woman said "Don't worry it does that all the time", and helped pick the coins up! 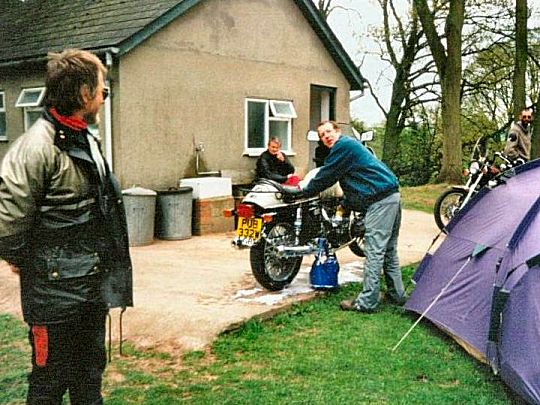 It's 1995 and Ted doing his annual bike wash while my husband Keith Jackson looks on.
Heather MacGregor

I attended the Rally in 2009 after a few years break due to clashes with the Tam o Shanter Rally, and was pleased to meet up with one or two people who don't do many rallies now. However there were a lot less people there than in the past and it could do with a bit more support. It was at a site not far from Tewksbury and on the Saturday I had a walk round the town with Dave (Cooperman) Cooper and Maggie McNeil. We were fortunate with the weather and it was a pleasant afternoon.

Indulge in a bit of virtual Dwyle Flonking courtesey of those stuffy people at the BBC.