The Capper is Special K MCC's winter rally. It's usually held round about the second weekend in February. 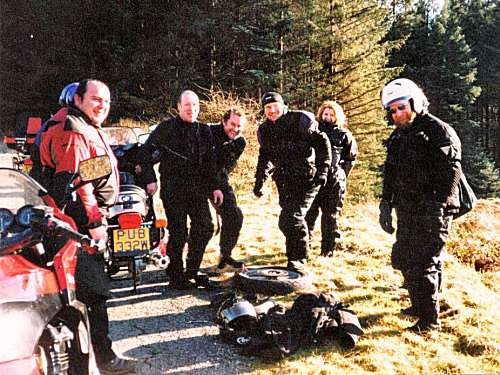 L to R Don't remember his name, but from Druids MCC, Me leaning on PUB, Alan Gilmore Laughing at me, Jim Waugh trying to break the bead, Suzie Gilmore, Pete Stansby (Puker)
Photo by Mary Roberts

The Cappercleuch Rally started off in the village of the same name, by St. Mary's Loch (hence the name), but has moved around quite a bit. I have also done rallies at Blackness Castle near Edinburgh, and at New Galloway. The present site is Hotel based, and is a few miles to the south of Edinburgh.

I have no idea how it happened but one of my tyre levers managed to get into the tyre...

The early rallies introduced me to the roads around the St Mary's Loch area, which is really great biking country. Also it was the first time I ever went to the Tibbie Shiels Inn, another amazing place.

The year it was up at Blackness Castle I rode most of the way home on one cylinder on the R80RT BMW I was using that winter. I needed to replace a cracked plug cap, but on the Sunday I never found anywhere open that had one. All the filling stations didn't carry anything more complicated than spare bulbs! When I really needed both cylinders I sprayed the faulty cap with WD40 and tried not to wobble too much when it chimed back in on two!

The rallies at the Ken Bridge Hotel (New Galloway) were always good fun. The river could be a bit near to overflowing at times, but it never actually caused a problem. The pub served good food and was always very friendly.

One of the years there I went out on my R100RS down through the Galloway Forest Park towards Newton Stewart. I was with Alan and Suzie Gilmore from the Squires, Mary Roberts from the Leicester Phoenix and a couple of members of the Druids MCC. Right in the middle of nowhere I realised that my back tyre was punctured. I pulled in to a handy passing place and set too with the spanners. I didn't want to hang about as the temperature was just about zero and the grass was all frosted over. By the time everyone had got back to see what was the matter I had got the wheel out and was busy getting the tyre off. I wanted to get my spare tube in and get it back on before it cooled down too much. I have no idea how it happened but one of my tyre levers managed to get into the tyre and I never noticed until I had the wheel back in and was packing things away. Up until then I had been pleased with myself for getting things done so quickly despite all the banter! Oh well, practice makes perfect. Although it was difficult to get the tyre off again with just one lever, I removed the lost one and, due to the by now cold tyre, had a bit of trouble reseating it, but eventually got it sorted. I ran out of CO2 cartridges, so had to resort to the bike's pump which, for some reason, seemed to attract lots of suggestive comments from my by now bored and cold audience! I still get ribbed about this incident, but I am not bothered. I was back on the road within an hour. I don't think you would have walked to a phone and back in that time, (no mobile phone masts there!) and the wait for recovery would not have been fun.

Another year I decided to use the Crocketford Road to get to the rally, instead of using the main road up from Castle Douglas. I had a close call when I slid across a large patch of ice on a hairpin bend. I was lucky, because it turned out that Phil Staitham had dropped his Commando at the same place!

The only real problem I have with the rally is that it clashes with the Mad Axeman, and I have to go past that to get to the Capper!