The Brush and Broom was a one off invitation Rally to celebrate Val and Arthur Philp's 25th wedding anniversary, and also Arthur's 50th birthday. The proceeds from the rally were donated to the Cornish Air Ambulance.

I had to give in and change the burnt out exhaust valve I had been ignoring for the past year or so.

Held in September 2007, this was another excuse to have a weekend in Cornwall. I left Bradford after work on the Friday; I was aiming to use the Motorways down to Taunton, then A roads for the final 100 miles or so. I nearly ran out of petrol, as on my R100/RS I usually don't need reserve before Bristol, but after a nail-biting final 5 miles or so with the bike on one cylinder at times, I filled up with 22.7 litres, (the tank holds 23!) The bike had been running OK, a bit down on power, but was using a lot more fuel than normal. When I got home I had to give in and change the burnt out exhaust valve I had been ignoring for the past year or so. With the price of petrol how it is now, the work paid for itself in a few weeks!

This was a smallish event, with a good mix of people from all over the place and was held at a football clubhouse, not far from Launceston, with a nice flat area to camp on. I met up with Jim Waugh and Roy Watkinson from The Tee's Tornadoes and on Friday night we had a bit of a session on the real ale. So Saturday started a bit late, with breakfast from the catering van, then a "Waugh's tour" down to Looe.

Saturday night was a repeat of Friday, and no worries about the ride home because we were only moving up country about a hundred miles or so then travelling home on the Monday.

Sunday was very wet, and we had planned a visit to Morwellham Quay museum and, as we were in waterproofs anyway, the rain didn't matter! 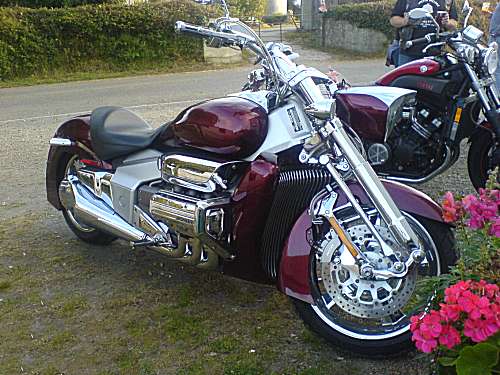 The Honda Rune that was outside the clubhouse is an impressive piece of kit, but would take a lot of time to clean up after a winter rally, I am not sure how you would carry the tent either!