Organised by Scrabsters MCC at the Jolly Tar near Nantwich.

Things were not going well for an early arrival at the Rally.

This is the first rally I have come across where it was possible to pre-book on line and pay by pay-pal.

The Rally name is derived from their club name and means (for those who don't know) a bottle of Newcastle Brown Ale.

Another new one for me and, to be honest, was only chosen because it was local enough to do just on the Saturday.

Saturday lunch time saw me ready to set off, and guess what? After a morning of beautiful sunshine it started raining (luckily just a local shower)!

The logical way to Nantwich from Bradford is to use the M62, but as usual I had other plans!

My first stop was in Huddersfield at Roger Bennett Engineering. Roger is an old friend and when I get chance I like to call in and see what he is up to. He re-builds BMWs and does a lot of the engineering work for Motorworks, the local independent BMW dealer. His place is near to Huddersfield football club's ground. Guess what? They were playing at home, so although I got there OK, I was then trapped until the game started and they were all inside. Things were not going well for an early arrival at the Rally.

My route took me over Holme Moss and then via Glossop down to Buxton, then across to Congleton and Crewe, then on to Nantwich. It's a good route, but of course the Derbyshire section is very well policed and mostly 50mph limits.

Just before the rally I passed a replica of Big Ben made out of straw bales, but with proper clock faces. I was almost tempted to stop and take a picture, but I was late enough!

The Rally site was quite crowded and I had expected this arriving so late, but by moving Roy Watkinson's bike I got my tent on some reasonably flat ground.

This was not the best campsite I have ever seen and it would be really bad on a wet weekend as all the hollows and ruts would fill up with water.

I no sooner got my tent up when I was informed that we were going in to Nantwich by bus for a meal and a few beers. 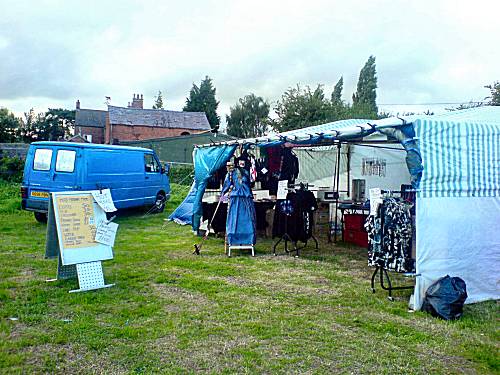 I just had time for a quick look around the site to see who was there and check out the bikes and the Biker stalls.

As well as the usual trikes there seemed to be a lot of Chopper type bikes at this rally.

The Harley crowd were out in force too, and some nice Jap custom bikes.

Not too sure I would like to ride the Suzuki Bandit with anything on the rack; they wheelie quite well as standard, without a counterbalance! 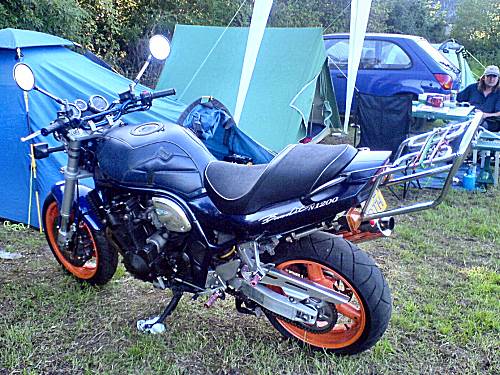 Judging by the amount of cars in the car park it seems a lot of people hadn't bothered loading up their bikes, but had made other arrangements.

I went in to Nantwich with Alan and Sylvia Giddens and Roy. We had a meal and then had a tour round some of the many real ale pubs. We had to catch the last bus back at about 10.30 and just managed to get back to the Rally for the bands last set. 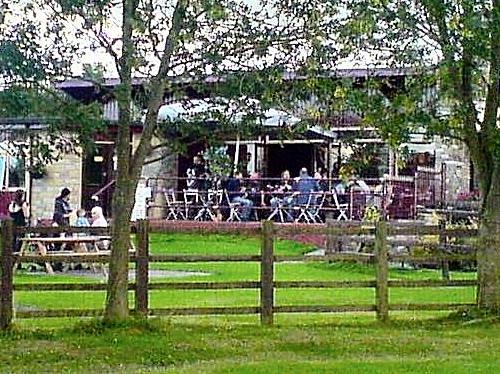 It was warm enough to sit outside so we commandeered a picnic table and stayed up far too late putting the world right!

Sunday was fine again and I had to go home via the motorway as I was due at a friend's birthday party. It was the same distance but took about half the time, just a waste of petrol though!