Checking in from Friday afternoon. Karl Biddle has now joined the past members. Brian Reynolds has inherited Terry's bike and Dave Cockerton is still under the influence of the dark side.

This was a last minute decision to go to this event. Way back in 1980 Alan Giddens told me about the first one and showed me a flyer proclaiming that a heavy metal rock band called "Rusty Dumps His Guts" or something like that, would be performing. Enough said. I didn't like heavy metal or rock disco that had, for me, ruined the rally scene. I still don't. So I missed the first and subsequent years.

Can't remember which club ran this one.

From the news on the LPMCC home page I saw that the Big End rally was on for the coming weekend
and I was at a loose end. I managed to get hold of Nigel and luckily secured a last minute invite. Saturday morning arrived and I decided, as the weather was good, to ride down to Market Harborough on my 1929 500cc Sunbeam rather than the BMW R100RS. As I was starting to get my kit together it started to spit a little rain. Not to worry, I'll just jump into my rain suit, it won't last long.

By the time I had gotten down to Walsall it was a full blown tropical downpour and I realized that I had made a mistake. But too late now, got to press on. The front brake on a Sunbeam is only 5" in diameter and a shoe width of less than an inch. The drum is as strong as a boot polish tin so in effect you haven't really got a front brake and you have to try and second guess what the traffic is going to do and pray!

This six wheeler has a flag pole that could probably also pick up a power supply from overhead chicken wire if it was at 132,000 volts.

The tent was stowed on the very small carrier behind the single seat. All the rest of my equipment was in a ruck-sack on my back and, with me being a large person, it soon became evident that the whole setup was top heavy and not very stable.

Here are the few bikes Ben recognised. A single cylinder Rocket Three, a Matchless before they invented jampots, a BMW after the fall of Berlin and a 400-4 that looks just as good now as it did new.

Along the A5 the bike performed well, not missing a beat in the rain and keeping a good 50mph cruising speed. At Lutterworth I got onto the A427 and had to drop my speed and roundabouts were hairy. But I made it to the rally site just as the rain stopped. 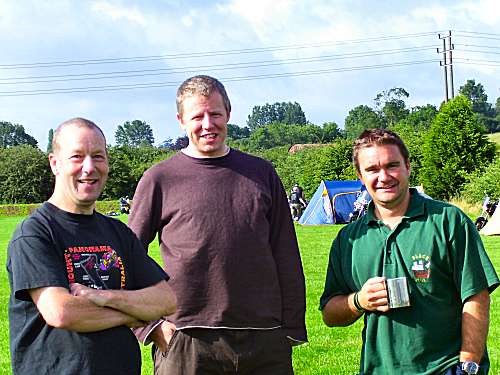 Ted Trett with latest recruits to the past members group, Andrew Ayriss and Karl Biddle. They are both looking forward to joining in pull-over-dribbling, Belstaff incontinence pants and ... er ... I forget the others.

Once signed in and tent errcted i bumped into some old friends from the Potteries who I had not seen for the best part of 30 years. They were just going into the town so I tagged along. We enjoyed a few steady beers in Weatherspoons and just as we were going for fish and chips the heavens opened again so we had a walk to another ale house for a few more. Eventually it stopped raining and we ambled back to the rally site.

Roy Watkinson of the Tee's Tornados showed a sample of the tee shirt for the upcoming fortieth Captain Cook rally. If you want to put your badges on a custon tee shirt LPMCC.net has just the thing.

The DJ and rock band were mind numbingly loud considering the size of the building. At the bar you had to do sign language, pointing and holding fingers up. You couldn't talk. We had to go and stand outside with all the smokers to hear what each other were on about. Again long time no see. Here was Del Cooper, he was on holiday with his family in I believe Devon and had left them there to come to the rally.

Nigel modelled this year's Big end tee shirt and tried not to Christen it with real tea from his leaky mug.

Some time around midnight I made my way back to the tent. Even with ear plugs in I could still hear the band. What the hell was the guitarist doing playing a solo "Harry Lime Theme" at 1.00am? Perhaps trying to show how cultured he was? They finally finished around 2.00 zzzzzzzzzzzzz mooo ... moooo! Moooo! Wha! 4.30am bovine vengance. All the cows in the adjoining field suffering from the previous evenings sleep deprevation had joined forces to get revenge.

Les Hobbs struggled through two hours of torrential rain to reach the rally on his 1929 Sunbeam. On Sunday it didn't look as if it had ever been taken on the road. Must have been jet-washed!

No point lying there so around 5.15 I got up and had several laps of the camp site looking at all the bikes and outfits. The morning was bright and cloudless. Time to break out the petrol stove for coffee and a fry up. That out of the way I soon packed my gear as the sky started to cloud over again and had a few words with Ben Crossley, who had turned up to take a few pictures and solve the question of why my ruck sack felt so heavy ... I'd got a stow-a-way onboard!! (see picture above)

The ride home was uneventful. Even the promised rain held off. Can't wait for this year's rally.