The Oddballs MCC 2007 Balls Up at Wem Shropshire.

I think we did everything in the porch that weekend.

We got there on the Friday and it was really cold for September, so we warmed up with a crate of Newcastle Brown.

Mick filled the mileage out at 83000 until I pointed out they don't want the mileage on your clock, they want to know how far we have come!

Mick got up at stupid 0'clock on Saturday morning after I told him off for using the porch for the toilet. I was still in bed at 10 clock so Mick sent Ginge to our tent with a crate of Newcastle Brown so we missed the silly games. In fact we missed everthing. Ginge was meant to be on gate duty but he never got there.

Then we crawled to the barn for curry and chips. Great food at the Oddballs and cheap!

It was so cold that night Mick got up and slept in the control tent because Terry and Rene had a heater in there which left me with two sleeping bags! 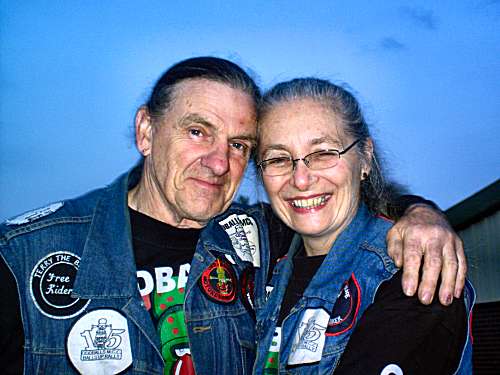 Woke up Sunday feeling pretty rough and threw up in the porch.

I think we did everything in the porch that weekend.

Thank goodness its a short ride home, about 12 miles.

The Balls Up Rally has been held at Sleap Airfield for the last two years. The field is full of rabbit holes which becomes an obstacle course after a few beers.

On a Saturday you can get to go up in a light aircraft for £60.

This year the Saturday band was Dirty DC but we made our own entertainment which was inserting glow sticks up your nose and curry snorting.