The ASF (Amicable Sidecaristes de France?) is the French equivalent of the federation of sidecar clubs. Their annual rally is a huge gathering of sidecars from all over Europe. It moves site all over France, but in 1995 it was held at Lauriere in the Limoges region and was in aid of their Jumbo Run. 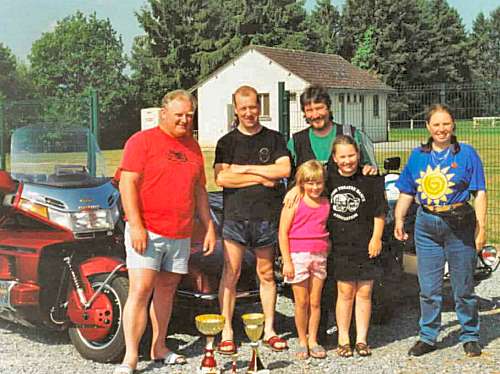 I attended on a solo bike, but was in the company of Len, Marita, and Laura Tempest who were on their Goldwing / EZS outfit. We were on holiday and fitted the rally in with visiting the camping moto touché motorcyclist camp site. 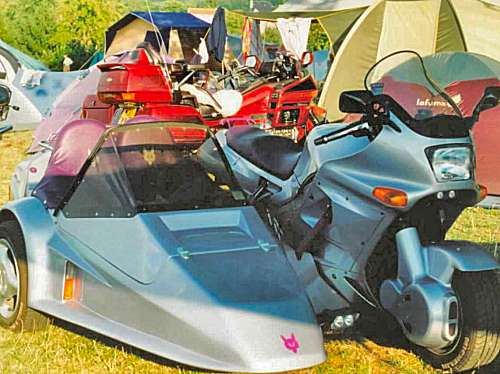 The range of outfits there was incredible. The French tend to convert sports bikes for their outfits and all the latest hyper sports bikes were represented, although the outfit that attracted the most attention was a Velo-Solex moped attached to what looked like a vintage pram! 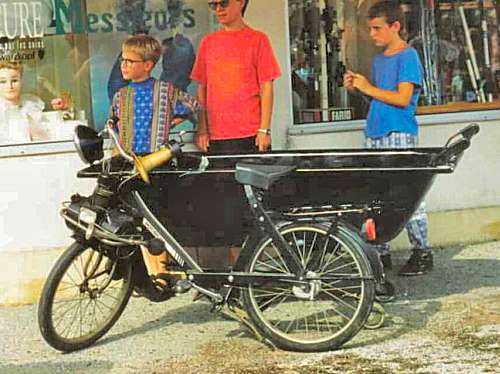 The whole event was very well organised. It was based in a school so all the facilities were first rate. It also coincided with the local fete and the town centre was taken over by a travelling fair. They had runs out, games for the kids (and the adults!) and a gala dinner on the Saturday evening. This was the only disappointment for me. Knowing that the French take their food seriously I had not eaten much all day and by the time of the meal I was starving. The main course was a big secret and was announced to the waiting crowd ... PIELLA ... Oh no, I don't do fish!

I thought I would be OK with a plateful of the rice and I had swallowed the first mouthful before I realised it was cooked in fish oil or something! I nearly refilled my plate. The fishy aroma all around was not helping matters. I had to get away so I volunteered to take Laura and another youngster she had befriended to the fair. I ended up with a hamburger whilst the kids spent all my money on the dodgems.