The Saltbox MCC gathered at the Antelope Rally as well as having runs to the Coventry club. Many past Saltbox members recall those days and share them through LPMCC.net

In March 1961, the far-sighted owner of the Saltbox Cafe at Biggin Hill in Kent, one Mr Bernie Britton, had the bright idea of starting a proper motorcycle club for all the lads that frequented his premises. The club went from strength to strength encompassing all aspects of motorcycling throughout the 60's and 70's. Although the club officially finished in the early 80's, a hardcore group of original members regularly get together to this day for social occasions.


To celebrate 50 years since the formation of the club, the above group are having a celebration party in the Surrey area over the weekend of 25th/26th June 2011. They would very much like to contact any old members of the club and invite them to their party.

If I remember right, didn't the Antelope do a club run to the Saltbox MCC in Biggin Hill / Kent and vise versa? I was a Saltbox member in the mid 60's when I lived in S.E.London. By the way, the Saltbox still exists, look on the web for Saltbox Motorcycle Club. Still a lot of the old gang around but gone grey & retired, same as me & a few more who read this.

As the Germans use to say Gute Fahrt (Meaning: have a good ride)

Hi! Just rolled up in your bike park. Used to be a member of the old Saltbox MCC, Biggin Hill. Oh Jeeze, "yesterday leave me alone."

The TT Races. The club dances and oh the laughs!

Now only the ghosts remain on Saltbox Hill. The spirit of an age gone forever.

Although I face my Nunc Dimittis, through blogs like this the great game and freemasonry of motorcycling will live for ever.

Ronnie Barker was my dad. I have one of his bikes. My dad passed away on the first of December last year and my mum passed away in 1988 but I have been told of good memories and seen some fun pics. My brother Ralph and sister Lorraine remember more.
I also have the Saltbox emblem tattooed on my back. 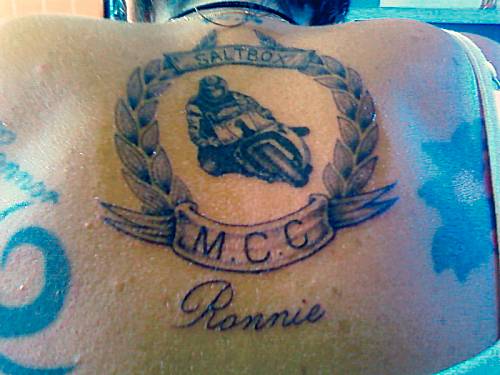 Would love to see some old pics. Here are some pics I found of Ronnie Barker and Irene with Ralph and Lorraine.
This one is Ralph on a bike in the back garden. I am not sure if it was dad's bike or Alan Barker's bike.
Also a pic of dad's two bike with my daughter taken 5 years ago. The old girl has the elephant on the front from when he went on a run to Germany. I think a member from the old club is going to buy her and do her up. 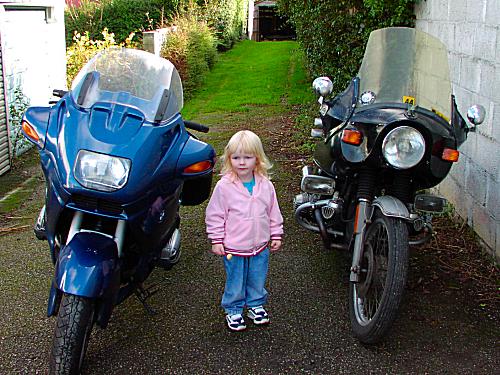 I now have the blue one.

I am deeply indebted to you for the photos Natalie. They bring a lump to my throat for days long past. Usually I hack photos to bits to wring out the parts I want but this time the original back yard photo speaks volumes as it is, faded and much loved. I tried to bring out the gloss on the BSA in the one underneath.

Ronnie's Belstaff carries his honours. I can make out two bars on an Elephant badge and several 1960s Dragon Badges.

I am still a member of the Saltbox Club and was at a few Antelope rallies from '69 to '71 or there about.

I remember "The Vicar", I met him on a cross channel ferry a few years later, quiet unassuming bloke, just give him a few beers and a fire bottle and he turned into the great fire act.

The Saltbox club still meets up at Tintagel at Easter. A few years ago we had a huge reunion with about 100 people (including children) - a great time.

Yes I still do Rallies. I organised the Moto Guzzi Club's Vee Twin Rally for 5 years, organised Irish rallies ... now thats what I call a Rally.

Very happy carefree times. Just a thought, Bo****ks to Global warming, burn fuel now while we still got it.

At nearly 60 I still ride a bike daily, no car now just two wheels, but working on another sidecar outfit. I had the purple BSA and Monza chair at the Antelope rallies. Any pictures?

Riding to Tintagell two up on the Jubilee with Graham on the back. Went down a pothole somewhere on the way and the frame snapped in half. We hitched all the way to Tintagel through the night and all next day. I cant believe the club is still running and going to Tintagel at Easter.

The old site is indeed a sorry site from the days when it was hard to find a parking spot for your bike.

I used to get a rollicking off Bernie for stuffing a scarf down the goal on the football machine. You could stay on it all night for sixpence Ha Ha.

Great days indeed - I remember Norman a big guy on a Dommie. He used to go to the Elephant and the Dragon, wonder what happened to him? Also Maurice who had the first Commando fastback. And Shakespear - I have a photo of him at the Norbury Hotel annual dinner.

Was it David Bailey the copper and TT racer that used to chase us back then?

Great days that I constantly recall in my memory.

I rode a 250 AJS then a Jubilee then loads of bigger stuff.

I still ride a K1200rs but only summer months now, mostly to France where you can use the bikes.

Soon be time to wheel it out.

I can't remember the actual Antelope rally but I do remember visiting the club house back in the '60s with my Saltbox friends. I remember being slightly shocked that it had a bar! The Saltbox cafe only served tea and coffee so we didn't drink and drive.

I'm sure I must have gone to the rally because I went to all the other main ones, Elephant, Dragon etc and made many trips in company with Paul Mullis, Steve Cawthorne and Maryann. Come to think of it, I do have an Antelope rally badge but I'm not sure where my badge jerkin is packed as my belongings are scattered world wide.

I still ride. At present have a Super Sherpa parked in Michigan waiting for my return.

Best wishes to all the old bikers

Geeze....! Just looked in on this site for nostalgic reasons.

Was a mate of Ronnie and Irene Barker and knew the family very well indeed. Cor, what happy memories this all brings back to me. Was a member of the Saltbox Club and used to ride a barrow - an Ariel Huntmaster with Spitfire cams and a Monza sidecar. Good outfit!

Ronnie had a younger brother, Alan, another seriously dedicated motorcyclist. We used to do the Elephant and Dragon Rallies and had a link up with a German MCC in Vierson.

Remember sitting in Ron and Irene's front room one night when Fritz Schriedegger and Johnie Robson came by to visit.

I remember Ronnie originally had a Tiger 100 with a sprung hub frame coupled to an enormous side car. He had tuned it no end and it went like the hammers of hell, chair or not. I overturned it on a tight right hander - sidecar over bike - gospel truth!

Ron later fell in love with BMWs and got himself an R69. Renowned for its quietness, it was claimed he bought it because of his neighbours moaning about the noisy motorcycles that used to draw up outside his house.

I was sorry to learn of his his demise from Natalie's posting on this website. There were so many characters who added their presence to the Saltbox MCC. They know who they are, both the still-living and departed. Altogether a unique time and a unique Club.

Thanks for the memories