The Anniversary Rally is organised by the Dover 69 Club.

The club was founded by Rev Bill Shergold in 1969 and as far as I know that is the basis of the club name! 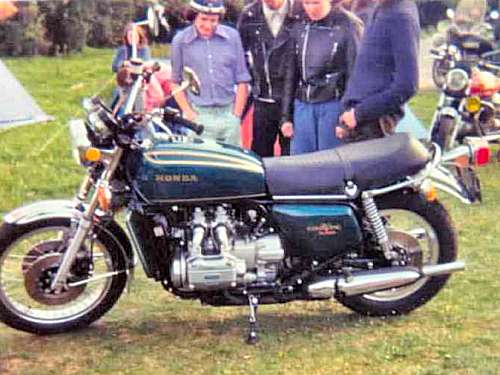 The rally was held at St. Radiguns Go-Kart track, Coombe Valley near Dover.

It was (and still is!) a long run from Bradford to Dover after work on a Friday. But at least there wasn't as much traffic then. I was on my Honda 500/4. I rode down with Barry Clark (750/4). This was pre M25 and we used to go down though London and usually went through the Blackwall Tunnel. Somewhere to the north of the river (in the East End?) we used to stop at an all night coffee / burger van that was in one of the back streets.

We arrived in the early hours of Saturday and had a bit of trouble locating the site. We were relieved when we finally got there and could put the tents up and get some sleep.

Later that morning we booked in and had a look round the bikes. As you would expect there were quite a few continental visitors. A large crowd had gathered around one particular bike, a Honda Goldwing. They had not been released in Britain then. Everybody seemed to be of the same opinion; too big, too dear, they will never catch on! Just look at the size of that back tyre (4.50 x 17) No one needs a tyre that big!

I took a picture of this white elephant of a bike because I thought they probably wouldn't sell many!!

I went to the rally on a 350 Honda twin, and at the rally I spotted a Honda 350 four, a beautiful bike that wasn't available over here. On the Sunday morning I got talking to the Belgian guy who owned it and made the silly mistake of asking how it went, was it good etc. He started it up and proceeded to rev the bollocks off it, right from cold. As if that wasn't enough to convince me of its merits, he leapt aboard it and thrashed it around the aforementioned go-kart track a couple of times.

Have you ever wished you'd just never asked?

Alan Barclay (The Banker) and myself had talked at a couple of rallies about going to the Moto Guzzi Rally in Holland which coincided with 69 Club Rally. After all if you are going to ride all the way down to Dover you may as well jump on the ferry and get a continental rally in as well.

The plan was for the Banker to meet up with me at Stonebridge Island on the A45 south of Birmingham around 6 pm on the Friday evening. I was on my BMW R90/6 and the Banker was on his Harley Davidson Electra Glide. After waiting for 45 minutes it dawned on me that he wasn't going to show up so I set off for Dover alone. I arrived at the campsite late and pitched the tent.

The next morning bright and early I packed the tent up and signed in. No sign of the Banker so I'll have to do it on my own. I got down to the docks and boarded the ferry to Zeebrugge. The Banker knew where the rally was and I didn't but I did have the organisers address.

After having breakfast on the ferry and riding up to the organisers address I was hoping to find someone at home who could direct me to the rally site. There was no answer to my knocking, but a friendly neighbour informed me that they had gone camping but didn't know where. There was nothing else to do but go back to the rally at Dover where I arrived saddle sore just in time for the drinking to begin.

The Banker's Harley had had a terminal engine failure. If I remember correctly the camshaft snapped. It was also the turning point; he decided that the troublesome twin had got to go! The Moto Guzzi Rally? I eventually got there a couple or three years later at Eck-en-Weil.