Ted Trett had a great time at the Hallaton camping weekend. They didn't see any bottle kicking, but emptied quite a few in preparation for the event!

The Hallaton camping weekend is organised by Tri Anglia Wheels who are affiliated to the Federation of Sidecar Clubs.

There were about 30 units there, and one or two day visitors. The event is held at a rugby club.

They had free tea and Coffee on all weekend, and meals were available in the clubhouse both nights.

One of the day visitors arrived on an ex German army R75 complete with machine gun! Just the thing for carving your way through the traffic jams.

A lot of the sidecar people seem to have caravans or trailer tents now, there is no shortage of powerful bikes well capable of towing almost anything.

The V6 Trike and Caravan looked a bit of a monster. 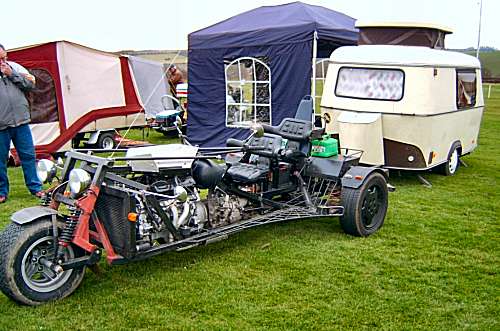 There are always one or two home made outfits to be seen.

There is a large spread in bike styles from the 350 Jawa to 2,300cc's of Triumph Rocket three power, and everything between.