When it rained there were more sparks outside the engine than were in it.

My first bike was a 1964 Greeves 250 Sportsman, which was probably built on a Friday afternoon. It came equipped with leading link forks, sprung with Metalastik rubber bushes, and a GRP handlebar fairing and fuel tank in a fetching two tone shade of pale blue and yellow. To this day I have never seen another one. Perhaps it was a prototype and the factory only made the one. Even the owners club can't recall it. 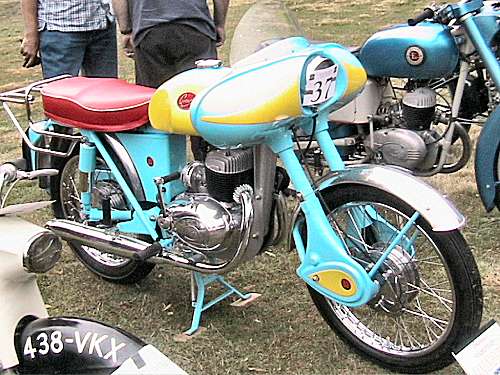 The worst part of the bike was the electrics, made during one of Wipac's darkest moments, the lights being particularly bad. The 6 volts dropped to 2 in the three feet from the battery to the bulb, although I suppose isolating the front of the bike with a ruddy great alloy beam didn't help with the earthing. When it rained there were more sparks outside the engine than were in it.

If the electrics were the worst part, the engine was the best. The Villiers 2T even survived my early attempts at maintenance to take me on some memorable runs, although at 30 to 1 mix it made more smoke at 60mph than a boy scouts camp fire.

I kept that bike for two years and swore I'd never have another. However during my stay as membership secretary for the Fellowship of Riders, Ron Bryan persuaded me to buy his 325 East Coaster. That bike was the worst machine I have owned. It would never do more than 35mph. I tried everything to sort it out, new seals, pistons, carbs, electrics, but nothing seemed to work. Looking back I don't think the Villiers engine was designed to work with siamesed exhaust pipes.

Rob promises to tell this bike's story another time and its only trip to the IoM with Bill Langley. In the meantime John Wakefield, who is Greeves Club Registrar for East Coasters, brings some knowledgable facts to the story. (We never let the facts get in the way of a good story)

You say the electrics were by Wipac. Not so they were Miller. You also mention a 325cc East Coaster. These were only made with the 250cc 4T engine.

John, The first Greeves I owned was, I believe, called a sportsman (reg nr 763 FFW) It had the glassfibre handlebar fairing, suspension covers and tank in light blue and yellow. Engine was a Villiers 2T 250cc. I've no idea what the rest of the electrics were actually, but the headlamp switch was definately made by Wipac as it had that name stamped on it so I may have mistakenly taken that the rest of the electrics were by the same manufacturer. If so, my apologies to Wipac.

The other Greeves I had was sold to me as an Eastcoaster by Ron Bryan, who was the local BMF/FOR rep. I've got no idea as to the reg number of this machine as I only kept it for few months to get to the TT. It wouldn't run correctly and wasn't very fast. For identity purposes it was painted in Greeves blue/grey with red tank panels. Engine was a 325cc 3T with siamesed exhaust exiting on the near side. It didn't have the single side alloy fined front hub as so many Greeves had, but a full width one as per the Sportsman. It may also have had a glass fibre tank - not too sure on that though!.

I'm not sure if this helps in any way, but it's over 40 years ago I owned them and time dims the memory. Please contact me if you wish.

When did anyone ride a standard motorcycle in them days?

Reading Rob's note on his Greeves sportsman I also had one and did see one other I parked next to at Howle Hill scrambles at the end of the 1970s but never met the rider.

I never had another bike after that but the memories are good. The reg was 59 SEA.