Keith Fosberry was a member from 1961 to 1963. During that brief period he helped to form the character of the early club that has ensured continuing enjoyment and success for many other riders. His motorcycles included an Arial 350, Excelsior twin, Royal Enfield 350 Bullet, BSA 500 and Sunbeam combo. 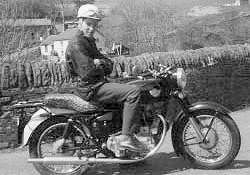 Keith married a girl called Valerie Burton who until then lived opposite Rod Hull (Pud) near the Rocket. Not having much luck was she.

Since leaving the club Keith raised two sons, Adam and Jonathan, and single handed saved his engineering company from success and profit.

Keith passed away in the early morning on Friday 19th August 2005.

Here is part of the eulogy bravely delivered by his friend and neighbour Mike Wallace.

Keith John Fosberry was born in Leicester, near Abbey Lane, almost 64 years ago. The youngest child of a family of six children. He had three sisters, Joyce, Margaret and Doreen. His brothers were Walter and Raymond. Educated locally he left school and worked in the supply industry to the shoe manufacturing factories in and around Leicester, later working with his brother Ray making leather cutting knives. Later they became partners, owning a company, Stanley Press Knives, employing in excess of thirty staff. The company was sold in the mid nineties when the brothers retired.

Keith met the love of his life, Valerie Burton at a youth club in 1960. They married and had two children Adam and Jonathan. In their leisure time Keith and Val became capable sailors at Staunton Harold Sailing Club, never raising any trophies but raising the roof at the annual pantomime. In their younger days they were members of a motor cycle club to which Keith renewed his association recently, minus a motorbike.

Let me tell you about the things he loved.

He adored his wife and pal - Val.

He loved his sons Adam and Jonathan, and their partners Helen and Jennifer. To Keith "H" and "J".

Dogs have been a prominent part of the Fosberry household for years. Numerous puppies having been trained by Val as potential guide dogs for the blind. Keith loved them all, even Hogan the little devil that tried to eat his house. But his special love was for the one that has stayed at home until today - Ochre. Keiths Little Princess.

He loved his home - its comforts and its privacy. Privacy was important to him. He was a home bird.

He loved a drink but he was not a pub person.

It has to be said - he loved gadgets and new innovations. He was Gadget Man. His weakness was for very large screen T.V.s, all round sound and the internet.

DIY was very important to Keith and his armoury of tools was considerable. He had at least two tools for every eventuality - if he could find them. He had a Golden Rule (no pun intended). When a tool was worn out - Keep it.

On a serious note, when the boys purchased their first time buy property it would not be unkind to describe it as a wreck. Keith invested much time, energy and resources into converting it into an excellent extended home. That was serious DIY.

He loved barbeques. I suppose he saw them as another gadget. He must have owned, over time, more barbeques than the average Australian could dream about.

Cooking was something he enjoyed. I can see him now. Glass of beer or wine in one hand and his beloved pressure cooker in the other. Gadget? If you liked your vegetables lightly cooked Hard Luck! As he cooked he would whistle and sing. His repertoire ranged from the Classics to Nellie the Elephant. He knew the words of the first line of the first verse of every song as it was originally written but the rest was an hilarious composition by Keith.

Keith had his dislikes: -

But he was not a moaner or whinger. He was capable and practical. If confronted with a problem he changed it, fixed it or got it fixed. Sadly two years ago he was presented with the biggest problem of his life - one that could not be changed - there was no fix.

Keith was a character. Generous, sociable and personable with a keen sense of humour, always mindful of those less fortunate than himself. He will be greatly missed.

Valerie and family would like to publicly thank the doctors at Alpine House Surgery, Drs Furbur, Schofield and Matthews, Susan their nurse and all the Reception Staff, involved with the treatment of Keiths illness. Also the Doctors and nurses at the Loros Hospice, in particular Sister Julie Kane. Nothing was too much trouble. Her care was above the call of duty, we could not have asked for better. Vals words.

Whilst you mingle and reflect on Keiths past life you may hear a chuckle in your ear or a nudge in your back. If you turn to find no one there, I know who it will be.

Foz is an obvious shortening of Fosberry. It is a nickname inherited by his eldest son Adam who has now taken on the mantle of supplying the Foz Spot with chuckles.

Val began life as Valerie Burton. Many of the 1960s portraits are from Val and Keith's wedding photos.

Oh, all right! Here is the current Foz Spot joke.

This page is absolutely brilliant, and couldn't describe Foz any better. Reading this reminds of the fun times past and the pleasure it was to have known him and Val.