I was up at 08:00, and when I got outside, Neil was already checking over the bikes for the days ride. Bill & Rachel Lee arrived for coffee & croissants. We set off to fill up at the local garage, and also leave the Velo cylinder head with them to check the alignment of the inlet valve etc. They are very enthusiastic about the old British bikes, and are keen to help with the occasional engineering job.

After that, we set off at a steady pace to get used to the bikes, especially the brakes! We had been well briefed about traffic roundabout etiquette in France, which basically meant 'trust no-one!' and 'indicators mean nothing!' But otherwise good common sense and awareness of what's going on was all that was required. Pretty much the same as anywhere else I suppose. We covered about 10 km and then stopped near to Istres, by the Etang de Berre which is a large body of water near Marseilles. 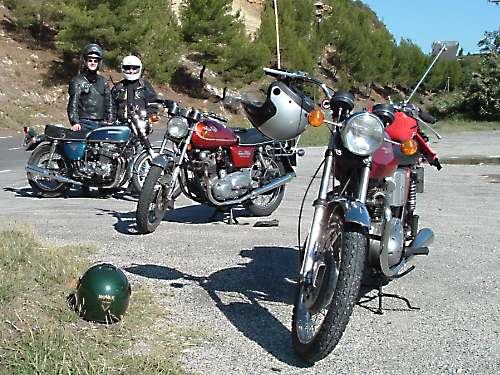 Neil wanted to hear how we were settling in. All OK so far. Off we went again, with me at the back. Very soon after, I got caught by traffic lights changing to red just as Bill and Rachel went through on the Honda. After what seemed like a long wait I was off again, and of course had to catch them up. That's when I realised how much brakes have improved since the sixties. 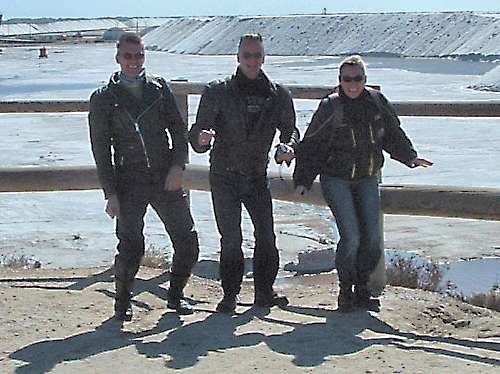 After about an hour, we stopped at an area of the coast near Port St.Louis du Rhone, which is used for salt extraction from the sea. They flood hundreds of acres of shallow pools with sea water at high tide, then close off the channels before the tide goes out.Then over time ( I don't know how long), and with the heat of the mediterranean sun and the Mistral (which was blowing very strongly that day), the water evaporates, leaving the salt which is then collected. 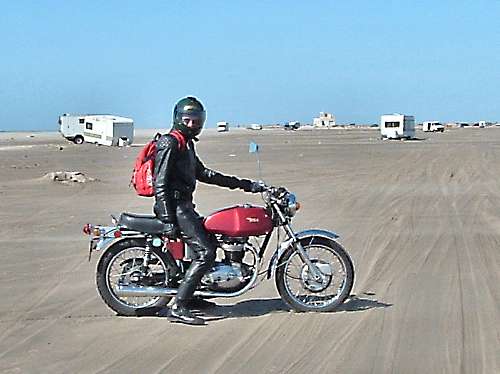 Next, was a ride for many miles (or kilometers) along a single track road between these ponds, with the mistral blowing directly across us from left to right! That was a challenge, to stay on the road, there wasn't much margin for error! We then arrived at the only natural sandy beach on this part of the coast, in the Camargue. It was desolate, and littered with abandoned caravans! These were used by the locals for shelter from the wind I guess. We had a ride on the beach, following Neil's lead, as the sand was hard packed, but it wasn't much fun on an A65, and Bill and Rachel on the CB750 weren't too keen either. 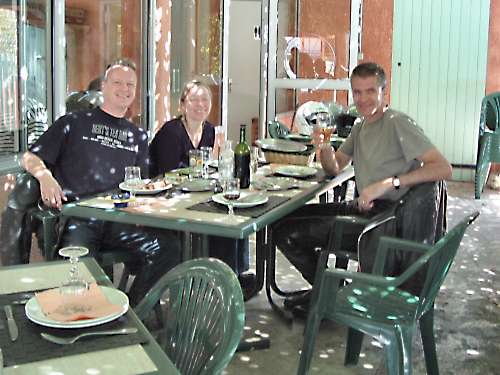 After that it was off to find lunch. We retraced our route between the salt ponds again, and motored for a while until we came to a small village called Le Sambuc, with a shaded roadside cafe, 'cos though the wind was really strong, so was the sun. 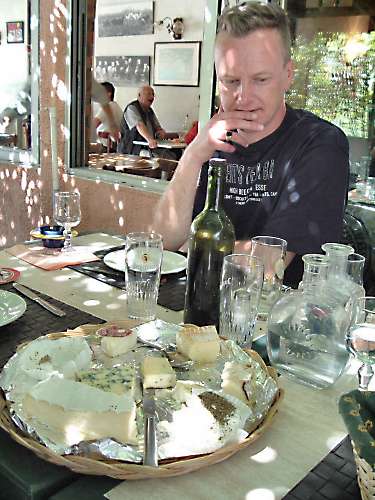 As English wasn't on the language menu here, Neil did a bit of translating from the menu, which was of the verbal kind, with a very local accent! Something got lost in the translation, and where I was expecting beef of some description, the bull's tongue that I got (in a distinctive bull's tongue shape!) was a surprise. But, with a full glass of beer at the ready, I tried the first mouthful, and, while it wouldn't be my first choice in the flavour department, it wasn't too bad, and I finished it, with a few sips of beer on the way! This was followed by an enormous selection of cheeses, which were delicious. Here Bill is making his mind up which one to have next!

After lunch, we swapped bikes. I went on the Norton, Bill and Rachel chose the BSA, and Neil got the Honda, and off we went. The bikes had been running a treat that morning, but for 'Olive' the A65 BSA, this was not to be her afternoon. Not far down the road, and unseen, she lost one of the oil level check covers on the primary chaincase; oil got onto the exhaust, and much smoke resulted! So we stopped, in the middle of the Camargue close to the Etang de Vaccares, and Bill and I retraced the few kilometers back to the cafe, in the forlorn hope that the cover would jump up and anounce it's presence! Guess what? It didn't. But the return ride with a 'bit' more throttle was really enjoyable. The Commando has massive reserves of torque. Neil realised that one of the other covers on the engine would fit, and duct tape from his handy tool and spares bag was used to cover the remaining aperture. 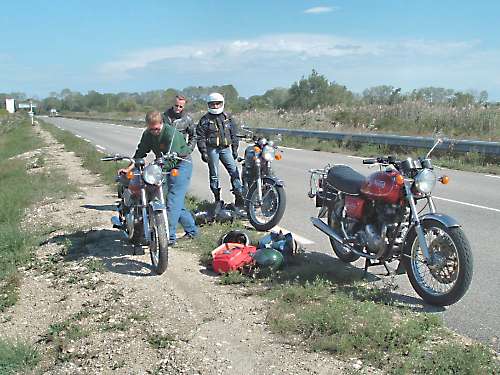 Then she ('Olive') wouldn't start. We deduced, after much investigation, that it was a duff ignition coil, and were pondering where to leave her safely, while we rode the 70 or so kilometers back home to fetch a trailer etc. etc. Just then (as in all good stories) a couple on a very modified Suzuki Katana stopped to see if we needed help. They had ridden down to southern France from Finland, and on the way, their battery strap broke, and they were using a webbing luggage strap to hold the battery in place. There was about two metres of excess strap, which they cut off and gave to us to tow the BSA back home! Thank you. So, I stayed on the Norton towing Neil on the BSA, with Bill & Rachel back on the Honda. We covered about 20 km back to a ferry across the river Rhone at Salin-de-Giraud. Whilst on the ferry, Neil tried to start Olive again, and she did! Recovering from the shock, we kept her going, and she never faltered the rest of the way home. After another delicious meal, a Provencal beef dish, and plenty of wine or beer, and lots of discussion regarding the breakdown, I got my head down around midnight.

Over in France, well in Provence at least, bikers seem to be a friendly bunch, riding on the right helps, because as you pass bikes going in the opposite direction, it is easier to move your left hand out to the left as you acknowledge the other rider with a two finger 'Victory V' salute (palm forwards please!), also, you will get to know the 'right leg salute'! Basically, you lift your right foot forward and outwards slightly, off the footpeg when overtaking another bike, whatever bike he/she is on. And no engine capacity or manufacturer distinctions either! I also noticed that car drivers are much more aware of bikes than here in the UK, and most times, they will pull well over to the right to let you past easily, at which point you use the 'right leg salute' again.