This year Kegworth Control managed to rope together enough past members and friends of the Leicester Phoenix Motorcycle Club (aka Embers) to operate our five hour Watch system.

As usual Wishbone and Dave Parry arrived an hour before the start so we could set up our stall consisting of a table and parasol. This year we had additional lamps and guy lines in case we had to tack into the teeth of a gale. Those additions came from last year's Owl Watch who could still muster enough brain cells to have bright ideas.

Five riders were already waiting as time approached for the noon day gun. Then, with 18 hours ahead of them, there was no mad rush to get out into the traffic but an orderly and restrained setting off on their adventure.

We settled down for a 20 minute wait for the first riders from neighbouring Controls. Before long everyone was back into the swing of things and we were soon welcoming old friends back from previous years and making new friends we hadn't seen before. After a bit of head scratching we remembered how to fill in their cards.

We heard from the early riders coming to us from Karl Biddle's East Goscote Control that A50 traffic was diverted from its junction with the A46 Northern Perimeter Road so we started to warn riders heading that way.

If anyone admitted they were heading to Ollerton Control they were asked to relay a cryptic message to Rachel, Katie and Sacha at their McDonalds Control.

This year Kegworth had a distance and width test for Platinum riders. After about an hour some bright spark parked a camper van in the way. So riders had to guess the distance including up, across and down the side of the van!

Regular Rob Winnett welcomed Grahame Billington to Crow Watch. Grahame is a Triumph rider and is a participant in our bicycle perambulations. All ample proof he is daft enough to be a Kegworth Marshal.

A steady stream of riders continued to visit Kegworth throughout Crow Watch keeping Rob busy with the stamp and Grahame on his feet with camera so we could show a page of all the riders. Towards the end of their duty there were so many riders coming in they had to beat them off with a stick.

All too soon it was time to hand over to the next Watch. 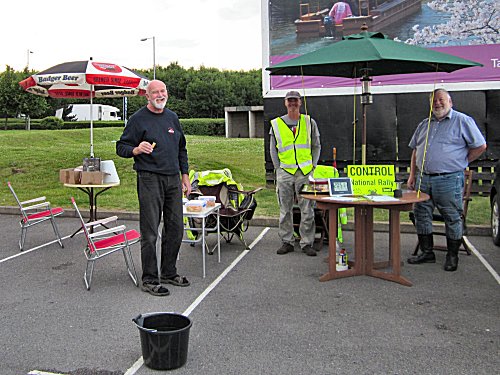 Andrew Grant didn't enter the event this year so he was pressed into joining Mary on Owl Watch that takes the Control into darkness in Star Trek fashion. Our distance and width test was further confounded because, of twenty lamp columns on the site, Platinum riders were asked to judge distance to the only one that was unlit.

It isn't so easy to get good photos in the dark but Mary did a pretty good job. Hope no-one rode the next link with a black spot where they were blinded by the flash!

Riders seemed to have more sense than to continue their pace into the twilight. Maybe they were keeping clear of all the folk rolling home from the pub on Saturday night.

Mary bakes delicious cookies to entice riders in from all corners of the country. They gave Crow Watch something else to look forward to and ensured that Bat Watch arrived on time.

This year Mary's cookies even attracted a visit from the local police. Put it down as bribery and corruption.

As eastern sky brightened and dawn temperatures continued to drop Bat Watch saw through cheerful riders heading for their last few controls on the way to the finish.

My impression of this year's rally was that it was very casual and unhurried. Everyone seemed to have time to chat, enjoy the roads and make friends.

Column 1 is starters, others are half hour totals. Move your pointer over a column to see who came through at about that time.

There are photos of the riders coming through Kegworth in our Photo Gallery.

Thank you to all marshals for being efficient, dependable and giving a cheerful welcome to riders.

Thanks to Stacy Dennis for permission the use Moto Services car park.

Thanks to all the riders for making our task so easy and pleasant.

See you all next year!