TALES FROM THE YEARS SPENT POLISHING

Then the devastating news broke. Learners would be restricted to 250cc until they had passed their test. My heart sank! I now had to consider a range of bikes I had never even glanced at before.

Most 250s in those days consisted of commuter two strokes. The choice was from such names as James, Francis Barnett, or the more sporty Cotton or Dot. We never considered foreign bikes. BSA and Ariel did four strokes but they seemed real plodders with plunger suspension and side valve engines. It took months to reconcile myself to my situation. Alan, who had not bothered taking a test on his red Dommie, borrowed an NSU quickly 50cc, passed his test and swung his leg back over the Norton.

I had to get a motorbike. I had almost decided on a Triumph Tiger Cub. Although it was only 200cc the Triumph works had tuned up the old Terrier from the beginning of the decade and made a fast, attractive, high revving single. With its rubber gaiters, telescopic forks and drop handlebars it projected the image I wanted. That was until I saw the Enfields.

One night I went with the boys to the youth club at the old school to have a game of snooker and look at the girls. Some London lads were down and as we swung into the darkened playground our headlights picked out the shining chrome tanks sporting the Royal Enfield crest. We went to scrutinise these newcomers. Even Alan who scorned anything less than 500cc was impressed. These 250s looked large with their bulbous tanks, Ace bars, five speed gearbox and aluminium telescopic forks. I was smitten. I scanned the lists in my magazines for the racy Royal Enfield Crusader Sports. ES Motors of Chiswick had some late second hand models. I went up on the tube train with my father to sign the hire purchase agreement. I had soon parted with my hard earned cash for the deposit for a burgundy red model. I ran my hand over the lashings of chrome and crouched over the big tank as it stood on its high aluminium centre stand gleaming in the showroom.

That night I could not sleep for excitement. All through the next two days I carried with me a brochure showing a metallic blue version to look at in my spare moments. I was going to pick up my bike on Saturday, today was only Wednesday, how would I survive?

That evening the boys came round and we went for a thrash round the lanes. I climbed onto the back of Roy's Trophy. The speed was high when we set out, by the time we reached the twisty Hertfordshire lanes it was reckless.

Dicing, attempting suicidal overtakes, it had to happen. At sixty miles per hour we angled round a bend scraping shoe leather on the road, sparks flying from Alan's silencer as it touched down. It was then that we hit loose gravel! The roads had been re-surfaced and both bikes lost control of their front ends. Alan's Dominator slid onto its side making circles in the road. Roy's Triumph dipped its front wheel down into the deep drainage ditch and I was flung high into the air over the hedge and landed in a field with a painful thud.

Although we howled with laughter, behind the hollow laughter was apprehension and in my case pain.

Alan's Dommie had the least damage. The footrest and handlebar had taken the brunt of the force, they were rubbed and bent. We dragged Roy's Triumph out of the ditch. The weak Triumph forks were buckled but we managed to straighten them a little by wedging the wheel in a farm gate and wrenching round the bars. We limped back home, Roy laughing nervously and pretending to overtake Alan with an oval wheel that felt like we were on a rocking horse.

I was in no mood to be frivolous, I had twisted my ankle and as we flew through the cool night air it swelled and stiffened. Not wanting to alarm my parents about the dangers of motorbikes, we told them that I had stepped off the kerb awkwardly. That night I hoped that I would still be able to pick up my Crusader at the weekend. 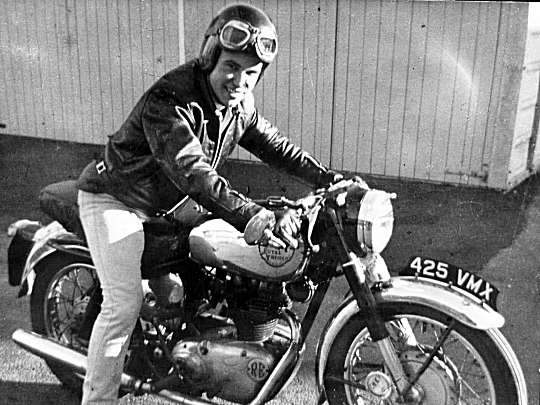 The bike was serviced, full of petrol and outside the shop waiting for me. Two leather jacketed boys walked into the showroom to sign for the bike and get the key. Pete, a friend who was going to ride the bike home with me riding pillion and me hopping along with the aid of a crutch. I sat on the back, leg out stretched and smiling as Pete picked his way through the London traffic.