Breakfast at the hotel was very good, and it was here we made contact with the first of our travelling companions Colin & Irene also from the UK. They say it pays to advertise, and I spotted their Harley T-shirts and they saw my BMF National Rally shirt, which was starting to become an old friend, after all I had been wearing it now for a few days. We joined our new found friends and excitedly talked of our journey to come. 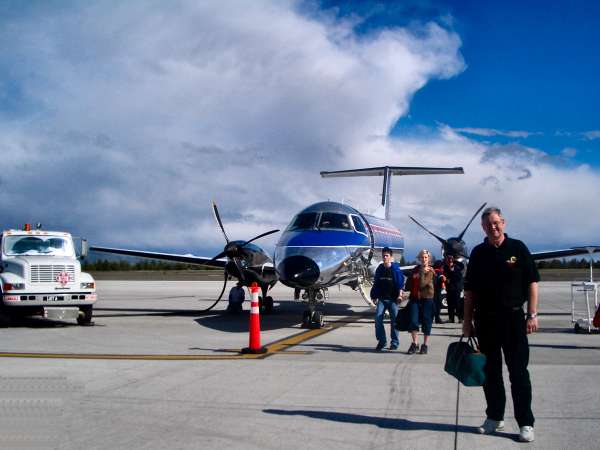 Bend was beckoning us, but a quick check with reception and a call to the Airport confirmed no luggage had arrived yet.

A walk was called for, to find our bearings, in case new clothes were required, but Bend only had designer shops and restaurants.

Bend has a very nice park right in its centre giving stunning views across the lake towards the Cascades. As Helens hobby is bird watching this park gave me so many brownie points, it was unreal, "we could come to the USA again". Cedar waxwings were the icing on the cake. I remember travelling to Nottingham to see waxwings and then standing around for hours waiting for one, the Cedar jobbies, to appear and, of course, it didn't. 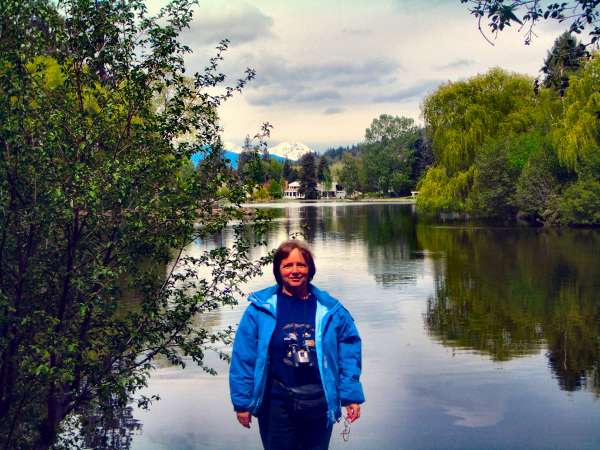 Back at our Hotel the luggage was still missing, it was now 3pm, and panic was setting in, as my Airport phone call fared no better than my 1.30pm call. I did find out that Sue had been on shift from 5.30am and had been very busy. Kim would sort it out when she came on shift?

Hotel reception staff suggested a taxi ride to Wal-Mart would be the best place for emergency clothes, so off we went with Jim, the taxi driver, who returned for us an hour or so later in what must have been the quickest clothes shop ever for Helen.

At 6.00pm I rang again expecting Kim, after all it was now her shift, but I got Stirling instead, at this rate I would know all the Staff personally, and perhaps be invited to the Christmas party. Maybe there is an up side to this story? I do like snow at Christmas!

Roger Yetton, our Guide, couldn't make it on Saturday evening, as planned, but Colin and Irene picked out a super steak restaurant for us, at 8.30pm, just a short walk away. The food was good, and so was the beer, which really surprised me, after all this was the USA and beer didn't seem to be a product they did well, or so I thought! 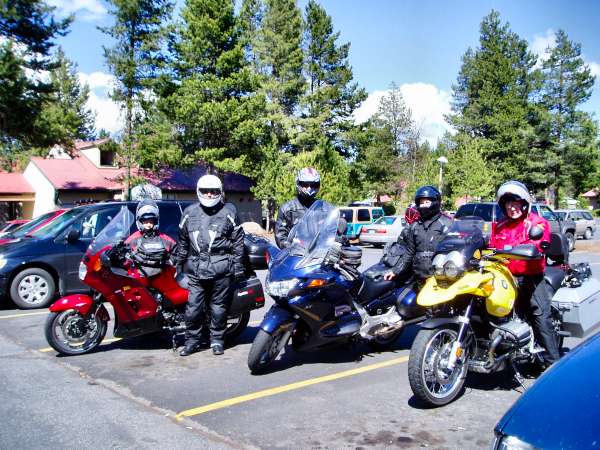 I was on the phone again to Redmond Airport by 11pm and "have a nice day" and "everything will work out" was really wearing very thin, because, as of 10am tomorrow, my holiday was to start, with no clothes and no motorcycle gear. Stirling copped the lot as I was really getting fed up, he got told quite firmly to, find the suitcases and ring me back, and I didn't care how busy he was! The only return call, of the whole episode, came at 10.30pm and it was Stirling "I have a tag on your luggage" and it would arrive on the 12.30am flight. "Send them straight over" I said. "Couldn't do that, it's against company policy". I asked if he sent them, and I paid the taxi at this end, would that be ok?

Reception rang at 1.30am to say that they had arrived and would I like to collect them? Sleep sounded better so in the morning we wheeled the suitcases into our room. At last we could start our holiday. To end this saga, picture me ironing and hair drying our undies, as rain had somehow got into our clothes during transit, but hey, we are on holiday, it's better than work.