Carl Wykes sorted out the old club photo albums, visitors book and the membership records for the 80s and 90s. We didn't need such a good excuse for a booze up.

Ian Goodson was hysterical with mirth after hearing Ben repeat the joke he told in 1968 (and every year since).

However he declined an invitation to hear it again, done in a 'funny voice'.

Carl Wykes and Graham Mills re-enacted the crowd scene from the 1980's photo at the back of the Cricketers and relied on digital jiggery pokery to fill in the other people. 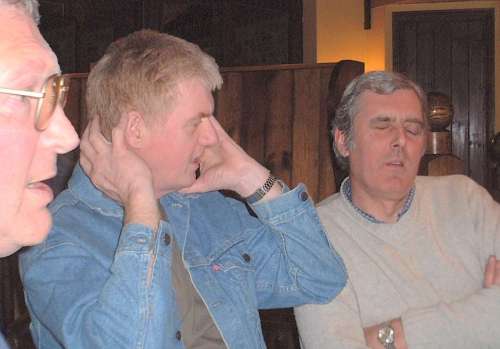 Mike Parry wasn't sure which was worse, Terry Riddle retelling hoary old tales or Martin Sentance snoring through them.